Is Netflix's Klaus a New Christmas Classic? Watch the Trailer!

What can you do in the unhappiest place on Earth? Smeerensberg, a cold Nordic land that's covered with bitterness brought upon by generational feud is where Klaus, Netflix's first full-length feature animated film, sets in. "The battle bell? What kind of town has a battle bell?" says postman Jesper (voice actor Jason Schwartzman) in the movie. In a town where fighting and hating on each other is a norm, can there be such a thing as holiday cheer? 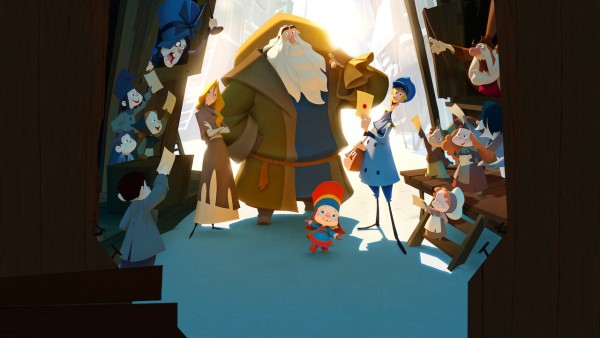 The film gives its own take at the origins of Santa, told through the lens of Jesper, a postal-academy student who is sent to the icy, lonesome Northern land so he can start a postal service. He then realized that the service can be so challenging for townspeople who are harsh and unhappy towards each other to the point that they have daily battles in the main square (thus the need for a battle bell); everyone is just not keen on writing and sending letters to each other or to anyone in this dark atmosphere.

Jesper was given this difficult task because he dropped out of the Royal Postage Academy. This sentence was given by his father, a business tycoon who also runs the academy. The goal is to have a functional post office in the most hated land. In one year, Jesper should be able to manage 6,000 letters to come to the postal office he has set up so he will not be cut off from his family's riches. And in his pursuit of this, he stumbles upon Klaus (voice actor J.K. Simmons), a huge man who is a skilled woodworker. He lives a solitary life, and he avoids people. Through Jesper's insisting nudges, Klaus is convinced to use his talent in the woodwork to make toys for the youth of Smeerensberg. The children will get the toy they want under one condition: they will have to send Klaus a letter of request stating what kind of toy they want plus a story of how they performed a selfless act of kindness in the recent day. This soon started a change in the town, but that does not end the conflict right away. (We'll just have to leave the rest of the story to Netflix viewers for now.)

This new film by the mentioned streaming service is entirely 2D animated, but it does not look like the old animated movies because it utilized technology that is normally used in CG (computer graphics) features. Volumetric lighting and texturing made the film look like a rich, modern storybook. Despicable Me creator Sergio Pablos is the director of the movie. He says in a phone interview with Polygon, "How do you bring high-end 2D back to the front lines essentially is my question. Klaus seems like a good opportunity to do that." Pablos also revealed during the interview that they imagined a Santa origin story, "picking up where traditional animation left off and what the future of his medium holds."

Klaus is not like any other Santa Claus Christmas story, where there is always an element of magic. It is cynical, and it is grounded in reality. For instance, the reindeer don't actually fly in this film, but the essence of all the Santa Claus origin stories is still felt.

"What if all that's good about Santa came about through the actions of the worst human being I can conceive of," says Pablos. Is this the making of a new Christmas classic?

Klaus is currently streaming on Netflix. Watch the trailer here:

ALSO READ: Seeing Ads On Netflix? Here's How To Opt-Out