Everything That Went Down During the Miss Universe 2019 Pageant 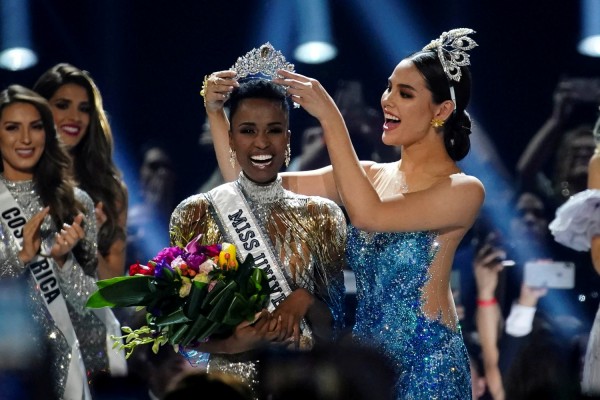 On the eve of Dec. 8, Sunday, beautiful women representing 90 countries gathered to fight for the title and crown to be Miss Universe 2019. The grand coronation transpired in Tyler Perry Studios located in Atlanta, Georgia, with Steve Harvey hosting it again - making it his fifth time to do so.

Former beauty pageant titleholders, Olivia Culpo and Vanessa Lachey, were also present in the event serving as backstage correspondents. The performer of the night is Ally Brooke, an international popstar who is part of the popular group called 'Fifth Harmony,' who sang during the opening and during the evening gown portion of the competition.

As we all know, it's simply impossible to judge 90 gorgeous ladies in one night, which is why an early deliberation from the selection committee is done before the actual competition. The committee of Miss Universe 2019 consists of distinguished women, namely Gaby Espino, Bozoma Saint John, Cara Mund, Sazan Hendrix, Crystle Stewart, Paulina Vega, and Riyo Mari. This is the second time the panel of judges is composed of women alone following the first all-female panelists last year at the Miss Universe 2018 pageant.

Aside from judging during the coronation night, the committee is first responsible for deciding the Top 20 of the competition; however, votes from the Miss Universe organization also count in the preliminary competition, which is comprised of three stages: swimsuit, evening gown, and interview.

In the preliminary round, five women from the three top regions which are Africa & Asia Pacific, Europe, and America, are chosen with a remainder of five more women from any region to make up the 20 finalists who will proceed to the semi-finals. Here are the Top 20 of Miss Universe 2019:

After the big reveal of who amongst the 90 candidates will advance to the semi-finals, the Top 20 finalists took part in a live segment called "opening statements" which became the judging ground for the Top 10. In this portion, the contenders were given a chance to give an introduction of themselves and their platform to the world. Here are the Top 10 finalists who managed to awe the judges with their opening statements:

Now, it turns out he's done it again as he incorrectly introduced the winner of the Best National Costume as the representative from the Philippines instead of Malaysia. No offense was taken, though, as Shweta Sekhon, Miss Malaysia 2019, quickly corrected him. He also pointed out that it was a simple mistake from the prompter and jokingly dismissed it, saying, "Quit doing this to me!"

Afterward, Miss Congeniality was also introduced to be Miss Poland by one of the backstage correspondents. This award is given to the contestant hailed to be the friendliest by the candidates themselves.

Before proceeding to the swimsuit and evening gown portions of the pageant, a tribute was given to Catriona Gray, the crowned Miss Universe 2018. The short segment highlighted her reign as Miss Universe and the things she has done for the entire year. She talked about her journey, referring to it as "unforgettable" and "life-changing."

A glimpse of the new crown created by luxury jeweler Mouawad, which will be adorning the winner of the Miss Universe 2019 pageant, was also shown as the Top 10 candidates are getting ready.

In these portions, the remaining contenders flaunted their chosen swimsuits and evening gowns; nonetheless, they aren't judged solely by their clothing as they are also encouraged to present what they are wearing the best way they can. In addition, they also gave a short statement each on why they chose to wear their pieces and what they symbolize.

After a short deliberation during the swimsuit and evening gown portions, the selection committee immediately chose the Top 5 finalists who will advance to the next round which is comprised of:

Afterward, the candidates proceeded to a difficult question and answer portion, which will determine who the Top 3 finalists will be. Each of the candidates was given questions about various issues from women's health to climate change - which they answered impressively.

After the nerve-wracking question and answer round, the candidates were narrowed down to three: Mexico, South Africa, and Puerto Rico. The remaining contenders underwent another question and answer portion; however, this time, they are presented with the same question just like in previous Miss Universe pageants. One by one, they were asked: "What is the most important thing we should teach young girls today?"

To this, Sofia Aragon, Miss Mexico 2019, answered that "Steve it's very important to teach young girls today the importance of their true value. We see so many perfections in social media, perfect lives, perfect bodies, perfect faces, perfect relationships. Nothing is that real. We have to teach them that who they are is already amazing, who they are is already worth it, because what they really are is not what it looks like, it's what they feel, what they act, and the way they react to the world. I believe a girl is worth what she has to offer to the world, way more than the way she looks. Thank you."

Zozibini Tunzi, Miss South Africa 2019, on the other hand, declared that "I think the most important thing we should be teaching young girls today is leadership. It's something that has been lacking in young girls and women for a very long time, not because we don't want to, but because of what society has labeled women to be. I think we are the most powerful beings in the world and that we should be given every opportunity and that is what we should be teaching these young girls, to take up space, nothing is as important as taking up space in society and cementing yourself, thank you."

And last but not the least, Madison Anderson, Miss Puerto Rico 2019, replied that "There's so many things that I would love to teach young girls if I have the opportunity to be the next Miss Universe, such as in a world where so many people wear masks, it's such a beautiful thing to see an authentic soul, to embrace your uniqueness, to embrace who you are. You just don't know who you can inspire just by being you, so celebrate that. Thank you."

It did not end there, however, as the candidates are given a final appeal with their closing statements. They each talk about the reason they joined Miss Universe and what kind of change they want to make if crowned.

Although all three finalists gave amazing answers and gave out heartwarming closing statements, only one can be crowned. With the competition cutting it close, Zozibini Tunzi, Miss South Africa, was hailed as the winner of the pageant and the now crowned Miss Universe 2019. The first runner-up title was given to Miss Puerto Rico, followed by Miss Mexico as the second-runner up.