Here's How to Get a 'Destiny 2' Season of Dawn Exotic Armor for Free! What Else did the New Season Bring?

Destiny 2 Season of Dawn is finally live, and it has arrived in a major update that apparently had more glitches than the normal Destiny 2 update, although they are working rather well for the players' benefits—plus data miners have found some interesting information about a former villain.

Get Your Free Season of Dawn Exotic Armor Piece

Based on a report by Forbes, one of the glitches found in the Destiny 2 Season of Dawn update gives the player a free piece of Season of Dawn exotic armor, even when you're basically doing nothing.

It is still unclear as to who discovered this glitch first, but a Redditor with the username marceltjuuuh posted on the game's Subreddit about the glitch, and fans have been using it to get some free exotic.

How to Get it 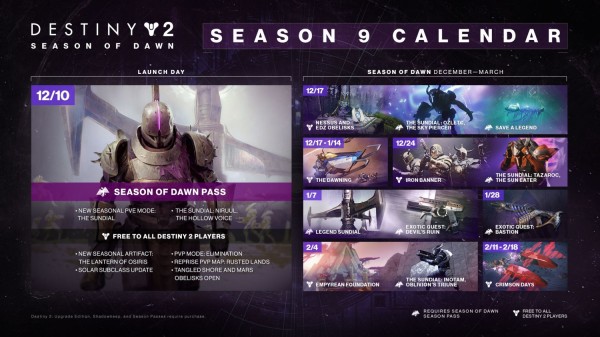 However, it appears as though you need to have surpassed level 98 in the Season of Undying for this to work, and you also need to log in on your Bungie account from your console.

You also need to go to this link, which is sort of an interactive Season of Undying battle pass wherein players can view their progress from the past season and claim any rewards they were unable to claim before Destiny 2 Season of Dawn started.

Once you're there, go all the way to level 98 where you will see an exotic engram that you can claim, even though it's highly likely you have done so during the previous season.

That means you can get the Season of Dawn exotic armor piece if you already have every piece from the previous seasons.

Meanwhile, that is not the only surprise Destiny 2 Season of Dawn has brought, as it seemed like the patch has hidden some information with regards to a former villain that avid fans and players will definitely know.

According to Eurogamer, the lore was datamined from the Amnestia-S2, which is an exotic ship that should go on sale soon through Destiny's Eververse store.

ALSO READ: Here are Every Notable Announcement on Sony's State of Play 2019

Either way, it has been posted on Reddit, so you can also check out the full story in the post if you prefer--but, you should know that this lore is a reference to a former Destiny 2 villain, so if you haven't played the 2018 expansion, Forsaken, you might have a problem knowing who's who.

The Future of Uldren

The lore pertains to Prince Uldren Sov, the Queen's brother, and the slayer of the fallen Cayde.

If you've been following Destiny's storyline, it's no surprise to find out Uldren has come back from the dead--and he is now a Guardian after being revived by a Ghost named Pulled Pork.

According to Destiny lore, anyone who had been revived this way will have no memory of their past life, so that means Uldren has no idea about his heritage, nor what he has done, and apparently lives in an unnamed location.