Another win for science as the Spitzer Space Telescope by NASA has brought back stunning images of Tarantula Nebula, which can be found about 160,000 light-years away from Earth inside the Large Magellanic Cloud! Although the Tarantula Nebula is reaching its end on January 30, at least the Spitzer was able to collect multiple observations approximately from February and September of 2019 to create a high-resolution image. 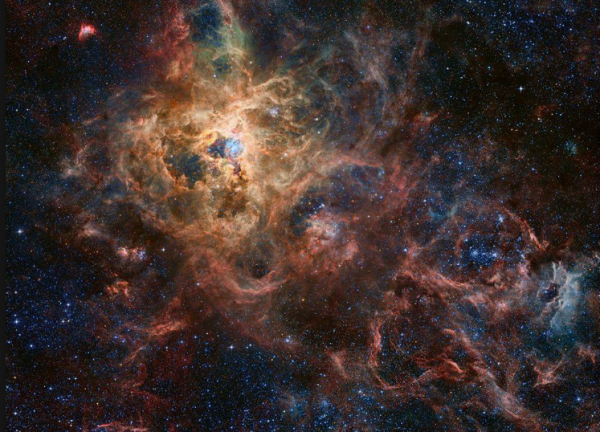 The origin of the name "Tarantula Nebula"

NASA has a term called the hotbed of star formation, and the Tarantula Nebula belongs to the early targets under observational study after the launch way back in 2003. This name originates from the placement of its bright patches that shoot a spitting image of a tarantula, according to the European Southern Observatory (ESO). About 1,000 light-years across in measurement, dust is minimal, and that creates a great environment to further our understanding of the formation of enormous stars, according to ESO.

The mystery of this nebula unveiled

With an R136 and within a "starburst" region, the existence of enormous stars is extremely close by with rates greater than anything else in the galaxy according to the findings of NASA. Included in the R136, there are about 40 enormous stars each with the size of about 50 times the mass of our beloved Sun, which are positioned only about less than one light-year across or when converted, six trillion miles or nine trillion kilometers away.

The stars around this nebula

According to the findings of ESO, the surrounding stars in this nebula weighs about 300 times more in mass than the Sun! Far from exaggeration, there were some stars found within the cluster RMC 136a called the R136a1 that are 265 times the mass of our Sun. All accounts of ESO state that they may be a little over a million years old and that the R136a1 is already experiencing its "middle age" period and has already lost about a fifth of its starting mass over time or rather fifty solar masses over time.

The origins of these starbursts are still a mystery to NASA. It is still currently accepted that the Tarantula Nebula is the best-known field for spectacular supernovas to be observed by astronomers in 400 years.

The lonely mountaintop observatory in Chile

In February 1987, the lonely mountain observatory was able to discover Supernova 1987A possessing the power of about 100 million suns for approximately a month, according to NASA. According to the agency, the shockwave from this specific event still makes its way outward into space, experiencing brushes with material ejected from the Sun during its timely death.

2006 was the year that Spitzer made certain observations that revealed that light and even dust have a wide composition of silicates, which acts as the glue used in forming rocky planets around our solar system, NASA said.