The Nashville Tornado has recently done quite a lot of damage, with 25 people reported dead even including children and about 45,000 homes losing power. This shocking turn of events has not yet even been fully accounted for as the damage seems too big to handle right away. The home of country music is suffering as most of its infrastructure has fallen to the ground, and there are still a lot of people unaccounted for. 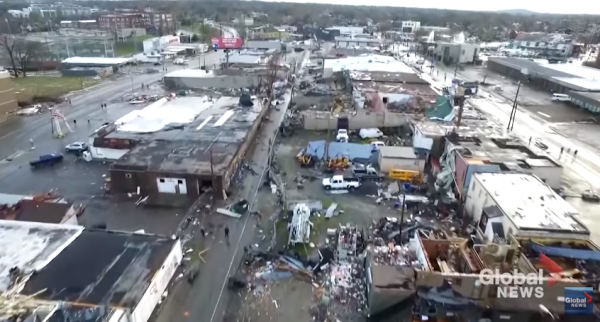 The lack of power has also hindered communications and other devices from working, which could have helped the citizens contact their relatives and friends seeking individual help while their property is damaged. Huge devastation for everyone as even communications are hindered, and the majority of the civilians are without homes, jobs, and the necessary resources to continue. This natural disaster came as quite a shocker to everyone.

The Nashville Tornado came as a surprise

According to some civilians, the Nashville Tornado came without warning and has given them no time to prepare or even vacate the area as the tornado swept past several neighborhoods and business districts before moving into the city's eastern suburbs and more. The reported amount of casualties has yet to be updated as the city is still trying to at least restore power to the necessary sources for the general public.

According to records, the previous most devastating tornado to do more than the Nashville Tornado's damage happened last March 2, 2012, when the twister hit different parts of the Midwest and South. The sound of Sirens and cellphones were pretty loud to alert civilians, but the twister apparently moved so quickly that not many people had the chance to vacate. Sadly, there were victims who were killed in the comforts of their own bed without even a clue of what was going on.

Not everybody was able to get to shelter, which left most civilians on their own to battle out the tornado with whatever structures they had to save them. The Nashville Tornado has had a similar experience with a majority of buildings from Germantown in rubbles as the tornado passed by causing mayhem in its footsteps. The storm continued eastward, which then hit Donelson, Mt. Juliet, and even Lebanon Country. The storm then continued towards the east, hitting Putnam Country.

There have been at least 48 buildings that have collapsed

There were at least 48 buildings that have totally collapsed, while most buildings and homes suffer major damages towards their infrastructures. Tennessee has already declared a state of emergency, but the damage has already been done. The city is pulling its resources to rescue those in need and treat those who are already injured. The Nashville Tornado was something unexpected for everyone around the area, and now that it has done its damage, the citizens of Tennessee are looking for help.