[WATCH VIDEO] What Could Have Gone Terribly Wrong with Nik Wallenda's Walk across Masaya Volcano!?

Just a few moments earlier, what was once impossible has now been achieved by Nik Wallenda as he walks across Masaya Volcano on a rope carrying a pole in his hands! The daring move by well-known Nik Wallenda has just pushed what humanity is capable of doing by a thousand-fold just by walking over Masaya Volcano despite enormous risks of what could have gone terribly wrong! 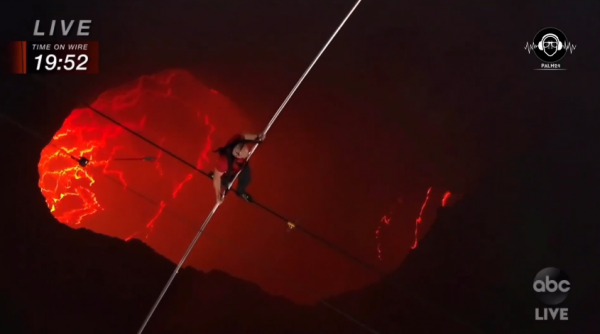 The chilling video has just been unofficially released!

For those who were not able to watch the live version, do not worry because there is another video found on Youtube that shows what happened as one man was able to walk across a tightrope and fulfill the impossible! The journey started out quite normally, and although everyone was very anxious, it seemed like things were going smoothly.

Protecting him from the heat and other harmful emissions from Masaya Volcano, the goggles were there for a purpose, but it seemed that these very goggles started to cloud his vision, maybe because of fog and sweat building up inside them. Nik Wallenda started to comment calmly, "let me take these goggles off" as he took his right hand off the pole, put up his glasses, and started to look around! The audience was astonished by how in control Nik Wallenda was with the situation, and it seemed just another act for him!

The amount of sweat from the fumes was building up

It was definitely obvious how the fumes and the temperature were building, making things uncomfortable for Nik Wallenda as he walks the tight rope. The amount of sweat from the beginning was already making things slippery for Nik Wallenda, but he was able to keep his composure all throughout stopping only in the middle to take his goggles off then slowly make progress towards the other side of the rope.

What seemed to be a gas mask to protect Nik Wallenda from the harmful fumes of the volcano started to make its way to the left of his face the further along the rope he got. It was only when he reached a little past the middle did he take his right hand again off the pole and adjusted his mask back to where it covered his nose, mouth, and also gave him proper breathing.

Problems started to emerge as the gasmask started to become uncomfortable getting into Nik Wallenda's mouth and stripping him off of 100% focus from the walk. The video shows him looking down and adjusting his gas mask multiple times to find the perfect position for his face. Later on, he decided to throw these away and keep his focus on the end of the line.

When Nik Wallanda had enough of the uncomfortable mask and goggles, he decided to put them away from his face and kept his eyes on his family on the other side! Nik Wallanda was able to conquer one of the most epic tight rope walks ever done on earth against the mighty Masaya Volcano!

READ ALSO: BREAKING NEWS! Coronavirus Has Two Strains And Possible More On The Way: Type S Strains Spread The Disease Without Them Even Knowing

ⓒ 2021 TECHTIMES.com All rights reserved. Do not reproduce without permission.
Tags: volcano Walking News
Most Popular