Since everyone can't go out due to the coronavirus pandemic, every tour and events have been canceled to mitigate COVID-19 hopefully. But that doesn't mean famous Travis Scott won't release his new music--and he has found an excellent way to promote it: through Epic Games' Fortnite. 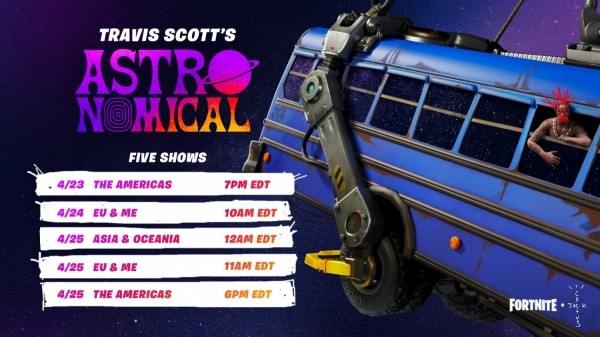 (Photo : Fortnite/Facebook)
Here's the schedule of the in-game event.

According to CNET, rapper Travis Scott will be releasing his new song during the Astronomical event on Fortnite this Thursday, April 23, at 7 pm ET/4 pm PT.

As with previous events, players who want to catch the new song's debut could drop in 30 minutes before the show starts. And as with past events, this one will definitely last long, so catch it while you can.

If you're not a big fan of the rapper, attending the Astronomical event will still be worthwhile, especially since everyone who attends will receive a Travis Scott loot: two new loading screens and an Astroworld Cyclone Glider.

Besides, Fortnite will also have a set of Astronomical challenges that players can complete where they can get a Travis Scott emote and spray.

Besides that, the rapper will also be a part of Fortnite's Icon Series, which allows players and fans of the star to purchase Travi Scott skins and cosmetics in the Item Shop, starting on Tuesday.

Along with Scott on the game's Icon Series are celebrities like Jordan Fisher, Pokimane, Elly, and Tyler "Ninja" Blevins.

Read Also: Fortnite Secret Challenge: How to Rescue the Teddy Bears From the Gnomes

The Stage is Set

As per The Verge, the developers described the concert event as "an other-worldly experience inspired by Cactus Jack's creations, built from the ground up in Fortnite."

For fans of the game, the event has been long-rumored, so when a stage suddenly appeared in the Sweaty Sands area over the weekend, many were not surprised.

It's also not as surprising as the rapper had previously joined a match with Twitch and Fortnite star Ninja, Drake, and NFL star JuJu Smith-Schuster, which took place in March of 2018 and streamed on Twitch.

This is also not the first time a virtual concert happened in the game.

Just last February, Marshmello virtually performed within the battle royale title, and it was the biggest in-game event ever to happen in Fortnite's history, garnering 10.7 million attendees.

Last year, director J.J. Abrams also used the game as a platform to reveal a Star Wars: The Rise of Skywalker clip. The infamous black hole event at the end of the game's Chapter 1 has also been one of the game's most iconic in-game events up to date.

With the ongoing coronavirus lockdown, more people have time on their hands as they stay indoors to be safe, so it won't be a surprise if the Astronomical event garners more people.

Besides the Travis Scott virtual concert, Fortnite players can look forward to more events before Chapter 2, Season 2 ends on June 4 as Epic Games promised a couple of surprises to compensate for the next season's delay.