The Tonberry is one of the most notorious characters in the Final Fantasy franchise, and it's now back in Final Fantasy VII Remake to make the players' lives a lot more challenging than a few boss fights. 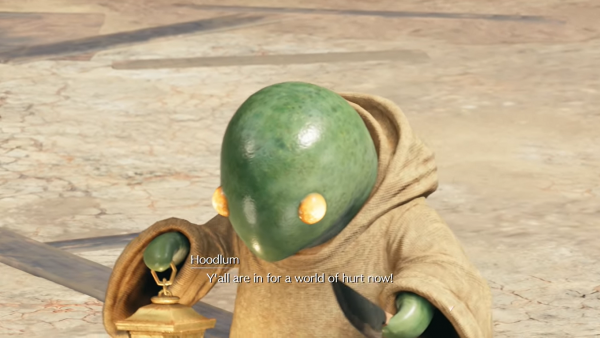 (Photo : Screengrab from Boss Fight Database)
The Tonberry is a small and seemingly unassuming, but deadly foe in FFVII Remake.

This little creature, though unassuming, is capable of wiping out the entire party with some of its attacks that cause instant death.

According to IGN, the Tonberry can be found first during Chapter 9 when fighting the Fat Chocobo in a simulation. However, Cloud and the gang will soon meet the deadly creature in an optional side quest later on.

For those who want to try and defeat the Tonberry, visit the Wall Market in Final Fantasy VII Remake Chapter 14 and then speak to Madam M, where she will send the party on a quest.

The little side-quest is known as "Malicious Goons," taking the party back to Aerith's house, the same place where Cloud fought Rude during Chapter 8, to face off with the Tonberry.

FFVII Remake players in Hard Mode can also fight this monster later on in the game as part of the versus Monsters of Legend battle in the Shinra Battle Simulator during Chapter 17.

How to Defeat Tonberry

There are two attacks that players need to watch out for: the Tonberry's Chef's Knife attack and a spell that causes Instant Death. If you're not careful, you'll need every Phoenix Down or Revival spell you have to bring the party back, assuming that even one of the characters makes it out alive.

Staggering the Tonberry is an essential part of defeating it, and you have the chance when it misses a knife attack.

Once it Staggers, give it everything you have got.

Just like any monsters and enemies in FFVII Remake, the Tonberry will automatically focus on the character that you are controlling, so make sure you switch control often and hit it from its blind spot.

Whoever wants to face off with the Tonberry should at least have the Warding Materia and the Subversion Materia.

Although it's not necessary to have them, having these two Materias will make the battle easier to finish, plus it can help negate the effects of the Tonberry's Instant Death spell. Additionally, it's highly recommended to equip both Materia during Shinra Battle Simulator vs. Monsters of Legend.

You can give this combo to Cloud or anyone in the party that you typically control, but make sure that they are linked.

This Materia combo will make the character immune or resistant to Instant Death, giving the party a fighting chance. It's even better if the Warding Materia is maxed out to grant full immunity.

As far as IGN knows, there's only one Subversion Materia existing in Final Fantasy Remake, so it can only protect one character.

With that, make sure that the character you choose to give the combo to has a Revival spell or a Phoenix Down to wake up the party and continue on Staggering and attacking the Tonberry until defeated.

Read Also: This is Why Sony's PlayStation DualShock is the Best Controller Ever (And Reasons Why It's Not)