An alien-looking pool has fascinated many people from the murky swamp down in Southeast Columbia. What causes its appearance, and would we be expecting to see more of those soon? 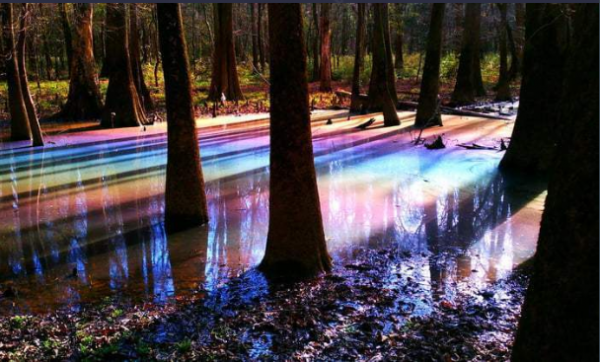 Read More: Careful! Common Ragweed Can Be Growing In Your Backyard That Can Cause a Severe Allergy

The Facts About The Story

Congaree National Park has its mysteries, including the alleged Bigfoot abduction back in the 1970s. Still, so far, the park has one of its most "spectacular" sights is a phenomenon that makes their swamp look out of this world where only a few people witness from time to time.

It happens because the phenomenon only can be seen with the right kind of light, the right kind of temperature, as well as the most isolated part of the park where snakes, bugs, and all sorts of creepy crawlies call it home.

Imagine a blank canvas splashed with several bright colors, and that's what you'd see; only this time, it is nature, which is the artist. Photos have been released on March 23 by the National Park Service, which showed how beautiful and creepy the phenomenon is. It is also stretched over large parts of the area, and you can't help but feel uneasy and its magnificence.

It's called "rainbow pools," since the ponds have hints of red, blue, pink, yellow, purple, and some other colors that don't seem to have a name. It is also fluorescent in color and looks like an oil slick, but disperses when stirred says, park officials.

Park officials wrote on Facebook, "These 'rainbow pools' ... are not a sign of pollution but a natural occurrence," and added, "Combined with very still waters, a few days without rain, and the correct angle of the light ... nature may provide you with a truly unforgettable Congaree experience."

There Have Been Two Theories As To What Makes The Phenomenon

The two theories involve something rotting, creepy, we know. The park service said, "Many times they are the result of decaying vegetation, especially cypress cones and needles, that release their natural oils,"

"The other cause can be bacteria breaking down iron in the soil."

The "alien pool" can be seen usually in colder months especially "early in the morning or later in the day as the sun is setting (and) gives a proper angle," The pools are usually seen in the water near trails, but not really in areas near creeks.

The Congaree National Park encompasses over 26,000 acres and is "the largest intact expanse of old-growth bottomland hardwood forest remaining in the southeastern United States," according to its website.

The tree canopy is over 100 feet up, with the tallest being a single loblolly pine that is 167 feet tall and nearly 15 feet around.