The National Aeronautics and Space Administration's (NASA) hope of flying a helicopter on Mars has a very catchy and deserving name.

Here's what you need to know about NASA's miniature toy which they are planning to bring to the red planet. 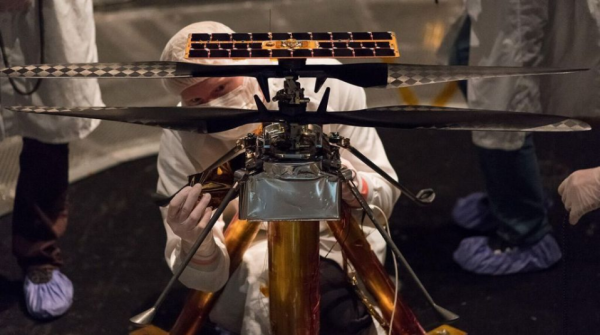 The name came from NASA's 'Name the Rover' essay contest. And the person who was lucky enough to name NASA's miniature helicopter came from Alaba high school.

A student named Vaneeza Rupani wrote in her submission, "The ingenuity and brilliance of people working hard to overcome the challenges of interplanetary travel are what allow us all to experience the wonders of space exploration."

Rupani is an 11th grader and recently had an interview with NASA on Wednesday, April 29.

She chose the word "ingenuity" because, in her own words, "that is exactly what it took to design this machine. The challenges faced trying to design something capable of flight on another planet can only be overcome with collaboration and creativity. It takes the Ingenuity of an incredible group of people to create something with so many complex challenges.

The helicopter is dubbed as a high-risk, high-reward technology field exercise. It will sit on top of the rover's belly and will be ferried by Perseverance to the planet Mars for a few months before its actual deployment. NASA is hoping that Ingenuity will be able to prove that powered flight can still be achieved on Mars.

Read More: Coronavirus Pandemic Might Last Until December According to A.I. Model's Prediction

What else is in store for the space mission?

NASA's Perseverance rover is carrying with it an inspiring coded message to Mars. NASA had this to say with regards to it: "Along with investigating difficult-to-reach targets, such as cliffs, caves and deep craters, future aircraft could carry small science instruments or act as scouts for human and robotic explorers on Mars or other celestial bodies."

Perseverance is scheduled to fly to Mars sometime in July or August this year. If all goes according to plan, it will arrive on the red planet in February 2021.

This mission will be one step closer to flight on another planet in the near future.