Apple recently won a patent that allows users to take group selfies even if they're far apart. Once the software is completely developed, users can take long-distance selfies, Mac Rumors reported.

Group selfies are amazing when keeping memories of each other in travels, gatherings, events, parties, and more. But what if you can take these selfies if one of you is in the Western hemisphere while the other is in Asia? The newest patent with Apple will make this concept come true. 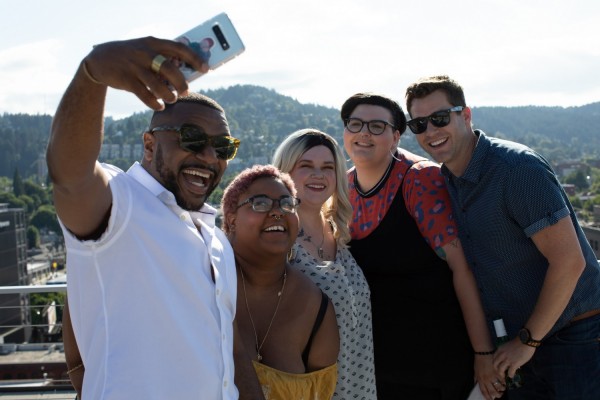 (Photo : AllGo - An App For Plus Size People / Unsplash)
A new Apple patent is making it possible for family members or group of friends to take selfies even if they aren't physically present with one another.

Long-distance selfies? It's now possible with the new Apple patent

From the application of the patent, the user may invite other people in the group selfie, such as in Zoom, and individuals are arranged accordingly within the frame. It also describes the window that appears on the screen of the invited users, prompting them to get ready for the group selfie.

Moreover, once the invited users accept the invitation and are positioned in the frame, there are options that they can select. These include live streaming photos, still images, or stored video games.

According to Mac Rumors, this allows several various options to create the long-distance selfie--just like having the usual selfie users have been used to.

It was in 2018 when Apple first filed for the patent, and it was only granted recently.

Also Read: Apple Could Be Revising Its Approach To iOS, macOS Updates

Meanwhile, iPhone users are in the middle of a situation after several users complained that their iPhones are showing a green tint over the screen. The reason as to why this happened has not yet been confirmed. However, according to LiveMint, it might be because of the latest software update.

There are users who shared that this occurs after they turn on the Dark Mode on their mobile devices. Others are saying that the green tint becomes more vivid when the brightness is adjusted toward the minimum.

In other news, the company is now allowing customers to purchase products, including AirProds, Macs, and iPads via their Apple Card's monthly installment option, according to The Verge.

These payments shall be managed through the iPhone Wallet app's Apple Card section, and then to be added to the monthly bills on the card.

Last year, the company launched a two-year interest-free payment package for iPhones bought with the Apple Card. This included a 3% cashback. They launched Apple Card in August in cooperation with Goldman Sachs. And users receive a digital card connected to their Apple Wallet app and the titanium-made physical card.