City dwellers were surprised to see their newly clean cities over the last few months. Let us take a look at how Copenhagen, Oakland, and Mexico City made their transformations permanent.

The ability to breathe more easily and see further has perhaps been the greatest consolation amid the coronavirus pandemic.

As the city begins to reopen after months of lockdown, urban planners and environmental campaigners are grappling with how to permanently keep the clean air and blue skies that we now experience. 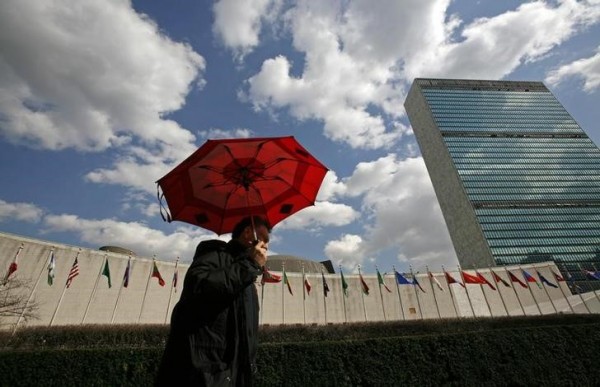 (Photo : REUTERS/Mike Segar (UNITED STATES))
A man passes with an umbrella in front of the United Nations Headquarters in New York, March 24, 2008. At left is the U.N. General Assembly building and at right is the U.N. Secretariat building.

"Citizens around the world can see change is possible," said Zoe Chafe, an air quality specialist with the C40 group of global megacities. She also added that people need to go to a rooftop to see mountains for the first time, and to think how amazing it feels to realize this is possible."

That rooftop could be in Kathmandu, where residents have finally seen Mount Everest after decades or in Manila, where the Sierra Madre mountain range has become visible again.

Although pollution has worsened in some Asian cities like Hanoi and Jakarta, the majority of areas across the world experience a healthier alternative to smoke and smog that have taken about 3 million lives annually.

With a better environment, cities find ways on how to keep it permanently. While there is no quick solution, community activism, urban design, climate ambition, technological innovation, and municipal leadership are at the forefront of environmental progress. Governments can learn from cities and states that were making progress even before the lockdown.

Copenhagen aims to cut emissions to zero by 2025. This may be the most ambitious plan among all nations, but the Danish capital goes beyond the smart, clean urban design, and cycle-centered transport. Thus, it has become one of the cleanest cities in the world.

This change is driven by grassroots activism, pragmatic government, and high taxes. In the 1970s, more than 100,000 citizens rallied in Rådhuspladsen or the City Hall Square to demand their streets back. Since then, town planners have continuously reduced parking spaces and improved pedestrians and bicycle lanes.

It now competes with Amsterdam for being the most bicycle-friendly city in the world. Riders can hang their bikes on resting bars attached to traffic lights without touching the ground. It also has takeaway coffee containers designed for bikes as well as "minibus-like" bicycles that can pick up and carry six children after school.

Copenhagen has been replacing coal-fired heating with biomass, wind, and geothermal energy to reach its 2025 target. Also, urban planners use carbon capture and storage technology to trap emissions from the main municipal waste incinerator.

Oakland and Los Angeles in California

Grassroots activism has recently been enshrined into law in California. The government was encouraged by activists to empower low-income neighborhoods to improve air quality.

This is a great leap compared to what it was in the 1980s. Back then, residents of Los Angeles, Oakland, and San Jose have experienced over 200 days under a toxic haze.

But now, tighter regulations, higher petrol standards, and less reliance on coal have made those days a thing in history. Several cities have also launched "green new deals," including the car capital of the world Los Angeles has upgraded its public transport system to urge people to leave their cars.

However, the most impressive work is being done at the community level by local activists in pollution hotspots, headed by Margaret Gordon, who has spent about 30 years campaigning for environmental health and social justice in West Oakland. This neighborhood is part of the San Francisco Bay Area and sits between two highways, factories, a port, and a proposed coal terminal site.

When she started working part-time at a local school in 1992, she saw shoeboxes full of asthma inhalers for each child. This triggered her to start investigating. "I went to a local meeting to express my righteous outrage about the conditions in the neighborhood," Gordon said in a Zoom video chat with The Guardian.

She monitored the numbers of trucks that passed through to the port and later got training and funding to measure levels of PM2.5 that can cause respiratory disease. Gordon worked with her West Oakland Environmental Indicators Project and scientists who collected data to prove that low-income minority communities are far more likely to suffer the ill effects of air pollution than other sectors of society.

After which, the California Air Resources Board ordered the port to take action with stricter regulation of trucks, the port facilities were electrified, while the planned coal terminal has been halted. These reduced air pollution by 74%.

Urban planners are most excited about Mexico City, which was once named as the world's most polluted capital in 1992. However, the current air quality level has greatly improved its 5 million residents. This was pushed by its mayor Claudia Sheinbaum Pardo, the first woman to hold the office. Pardo is an energy scientist who won the Nobel peace prize in 2007 for her stint in the UN Intergovernmental Panel on Climate Change. Before she became the mayor, she was the director of the city's environment department who oversaw the Metrobus' introduction, a rapid transit bus that moves across the city.

Last year, she announced a six-year environmental plan, which includes a 30% cut in air pollution, a 40 billion peso (1.694 billion USD) metro modernization, and planting of 15 million trees. The use of single-use plastic bags is banned and moves to phase out other single-use items like straws, cups, and balloons.

Meanwhile, the city's biggest challenge is traffic. Under the Hoy No Circula system, vehicles can be on the road based on their number plates. However, wealthier people simply bought more vehicles to get away with the restrictions, which doubled the number of cars from 2006 to 2016 and contributes to about 70% of emissions and most nitrogen dioxide pollution.

Pardo pushes for higher emissions standards for new vehicles, which promote the use of hybrid and electric vehicles while investing more in the metro system, cleaner buses, light railways, and cable.

"Mexico City is a stunning example of air quality improvements," said Chafe adding the city is dealing with environmental issues holistically. The air quality specialist also acknowledged that while the city is not perfect, "they have made really impressive progress."