The protests across the United States continue and has now become a global outcry against racism, but despite peaceful demonstrations in many areas, a few cities have seen utter destruction, especially the business sectors after looters use the protests as an excuse to steal trespass closed shops and steal a handful of items. 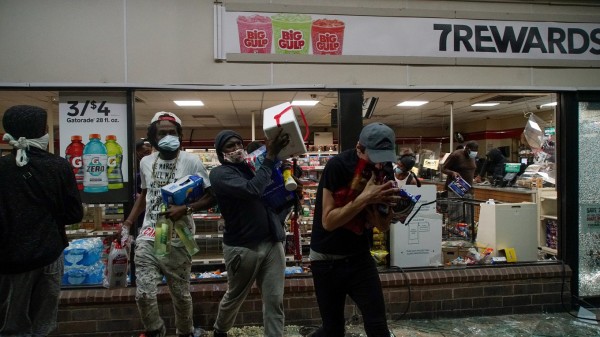 (Photo : LAWRENCE BRYANT/REUTERS)
Looting has become a massive problem amid the protests happening across the US.

One such place was Illinois, wherein businesses were destroyed, and items were looted amid the otherwise peaceful protests that have been going on.

According to the Daily Mail, the looting reached its peak on Sunday.

After a week, CBS Chicago began investigating the lootings and found one woman who was boasting about the theft and was selling the stolen items she got through Facebook.

The unnamed woman also showed a video that she captured of the looters in a local shopping mall with people running away from the stores they busted open, carrying various items on their hands.

Later on, she even showed her looting: several unopened goods and some full crates of Remy Martin cognac.

The woman showed another video where she was bragging about her deed and confirmed that yes, she looted, but after her viewers began condemning her for her actions, she replied and said she doesn't care and that it wasn't her first time looting, either.

CBS has already handed the footage to the Chicago police department and the Federal Bureau of Investigation (FBI), who are investigating all tips they acquire.

"The FBI is currently reviewing all tips to help us identify actors who are actively instigating violence in the wake of George Floyd's death. If you witness an unlawful, violent encounter, you can help by submitting photos or video," they said, encouraging people to come forward if they have any information.

The police have also arrested 2,665 people over "civil unrest and disorderly conduct," as well as recovered 529 guns.

According to WBEZ, a local NPR affiliate, the worst day of the protests happened on May 31, wherein they have recorded 15 homicides, which was the most in the last 36 years.

Besides Illinois, New York City has also seen a huge number of cases related to looting and violence amid the George Floyd and Black Lives Matter protests in different parts of the city.

In an interview with CNN, New York Police Department Chief of Patrol Fausto Pichardo confirmed that over 50 establishments had been burglarized in the SoHo district of Manhattan during the protests.

Among the shops' looters have attacked is the Nintendo store.

A tweet went viral, saying that looters were able to steal the massive Donkey Kong statue that stands inside the store, but the company quickly dismissed the tweet and said that the statue was not stolen.

The NYPD was able to seize one car that a looter owned that had more than $17,000 worth of products inside.