The House Antitrust Subcommittee grilled the CEOs of four of the country's five most valuable companies for nearly six hours on Wednesday, July 29, to probe about the companies' alleged anti-competitive and antitrust behavior. The hearing is the culmination of the congress' months of investigation about the market dominance of tech companies. It has been watched across the globe as numerous media outlets have streamed it.

Except for Microsoft, the CEOs of Amazon, Alphabet, Facebook, and Apple joined the virtual hearing held via video conference while most of the committee members were present in Congress. Chairman David Cicilline, D-R.I., has reminded them repeatedly to wear masks and to observe social distancing to avoid the spread of coronavirus. 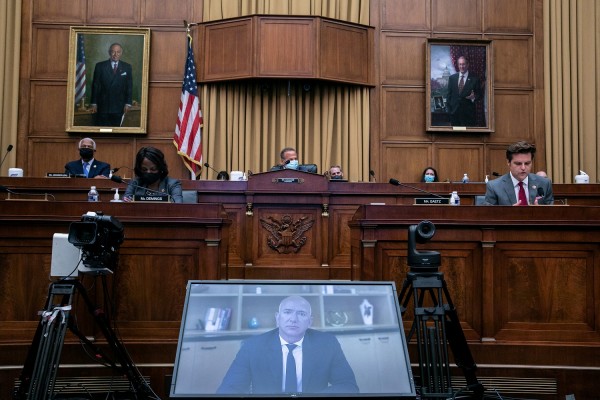 (Photo : Graeme Jennings/Pool via REUTERS )
Amazon CEO Jeff Bezos speaks via video conference during a hearing of the House Judiciary Subcommittee on Antitrust, Commercial and Administrative Law on "Online Platforms and Market Power", in the Rayburn House office Building on Capitol Hill, in Washington, U.S., July 29, 2020.

In a rare scene, four of the richest men in the world were interrogated by the members of the congress. The world's richest man, Amazon's Jeff Bezos had a wall of shelves as background. Apple CEO Tim Cook sat in front of a low row of greenhouse plants while Facebook CEO Mark Zuckerberg spoke with a plain white wall. While he has the least net-worth among the four, Google's Sundar Pichai looked elegant and composed in his charcoal suit and tie as he sat behind an office desk.

"Our founders would not bow before a king. Nor should we bow before the emperors of the online economy," the Congress' antitrust panel Rep. David N. Cicilline (D-R.I.) said. Over a year ago, he initiated an investigation to probe whether these four most influential companies used potentially anti-competitive means to reach their status.

Lawmakers came armed with massive amounts of documents and hours of interviews, including some private messages of Silicon Valley's elites. They claimed some tech industry players had become too powerful by threatening competition, consumers, and even democracy. Here are some issues raised noted by Tech Times and how the tech CEOs' responded: 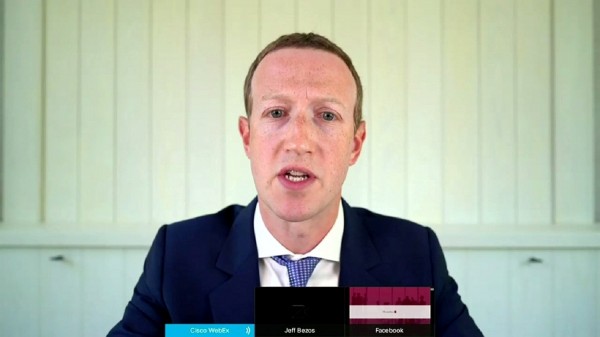 (Photo : U.S. House Judiciary Committee via REUTERS)
Facebook CEO Mark Zuckerberg testifies remotely via videoconference during a U.S. House Judiciary Subcommittee on Antitrust, Commercial and Administrative Law hearing on "Online Platforms and Market Power" in this screengrab made from video as the committee meets on Capitol Hill, in Washington, U.S., July 29, 2020.

On China's stealing from U.S. companies

On Rep. Greg Steube (R-Fla.)'s question: "Do you believe the Chinese government steals technology from U.S. companies?" The three tech CEOs walked around the question while Zuckerberg addressed it saying "I think it's well documented."

Addressing the lawmakers' concern about Google's dominance in the ad market, Pichai said he is "not exactly familiar" about how much of the ad exchange market that Google controls. However, the CEO noted that Google is "a popular choice."

Pichai also said his company is "investing rigorously" on child safety amid concerns that YouTube has improperly gathered children's personal information. "This is an area we take it very seriously. I am a parent, too," Pichai said.

Meanwhile, Rep. Mary Gay Scanlon (D-Pa.) also asked Pichai about YouTube buyout negotiations in 2006, but Pichai noted it was before he became CEO in 2015. 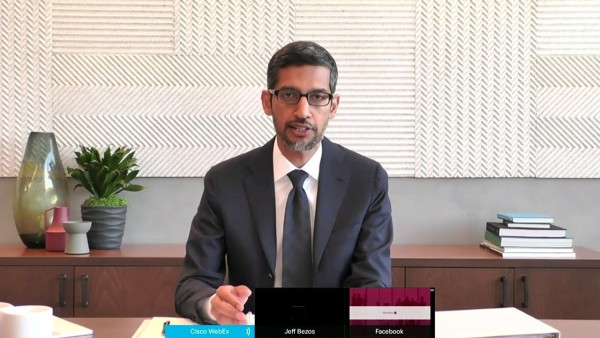 (Photo : U.S. House Judiciary Committee via REUTERS)
Google CEO Sundar Pichai testifies remotely via videoconference during a U.S. House Judiciary Subcommittee on Antitrust, Commercial and Administrative Law hearing on "Online Platforms and Market Power" in this screengrab made from video as the committee meets on Capitol Hill, in Washington, U.S., July 29, 2020.

Rep. Val Demings (D-Fla.) noted that Apple's removal of the kids tracking apps occurred at the same time Screen Time was launched. Cook defended the company's decision to remove the apps used by parents to track their kids because the apps "placed kids' data at risk." He also said they were concerned about the children's safety since the apps used "mobile device management," which companies use for tracking employees.

However, Rep. Lucy McBath (D-Ga.) questioned the timing as Apple "stifles the innovation," which "is fundamentally unfair." McBath questioned how Apple's Phil Schiller's promotion of the Screen Time app amid complaints about the removal of other apps.

Meanwhile, House Judiciary Committee head Rep. Jerrold Nadler (D-N.Y.) accused Cook of profiteering by charging commissions on companies that went digital amid the coronavirus pandemic. However, Cook denied the accusation and claims Apple is working with companies to find a solution.

Nadler also accused Apple of changing its commission policies to extract more revenue from developers, citing the email app Hey as an example. Similarly, Cook denied changing its policies, although Apple may have incurred mistakes due to the high volume of apps submitted to the App store. 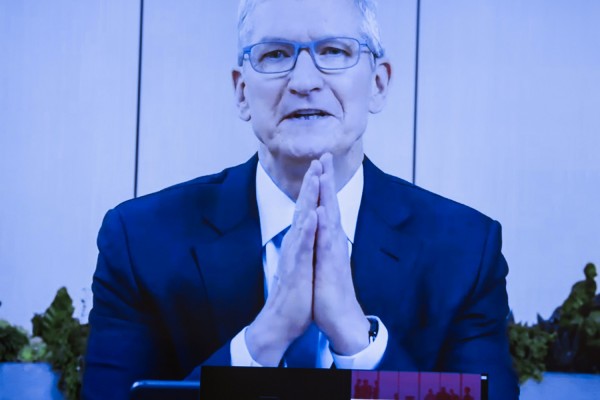 (Photo : Graeme Jennings/Pool via REUTERS)
Apple CEO Tim Cook speaks via video conference during a hearing of the House Judiciary Subcommittee on Antitrust, Commercial and Administrative Law on "Online Platforms and Market Power", in the Rayburn House office Building on Capitol Hill, in Washington, U.S., July 29, 2020.

On digital surveillance against rivals

Facebook's tools that helped the company uses to monitor competitions were questioned by Rep. Hank Johnson (D-Ga.). Johnson claimed that Facebook's purchase of an Israeli security app called Onavo Protect led to its acquisition of WhatsApp in 2014 for $19 billion.

Zuckerberg responded there were many reasons for acquiring WhatsApp and he said shut down Onavo's access to monitor fast-growing companies after acquiring it.

Rep. Mary Gay Scanlon (D-Pa.) asked Bezos about Amazon's decision to delay shipment of nonessential products in March and asked if they made Amazon devices such as Fire TV, Echo speakers, and Ring doorbell categorized as essential.

Bezos said he had no playbook for this and they moved very quickly while demands "went through the roof." "He added that they "had to make a lot of decisions very rapidly" as their goal was to deliver essential products to customers while keeping their employees safe. "We were not focused on profitability at that time," Bezos added.

After five and a half hours of the probe, Pichai took the most scrutiny while Cook got the least. Meanwhile, Cicilline accused the companies during his closing statement for monopolizing the market. "These companies... all have monopoly power," he said adding that their market control allows them to quash their competition "and expand their own power." He also proposed to have regulations across all companies. 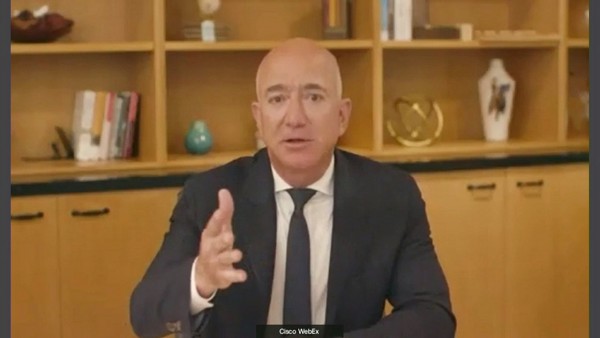 (Photo : U.S. House Judiciary Committee via REUTERS)
Amazon CEO Jeff Bezos testifies remotely by videoconference during a U.S. House Judiciary Subcommittee on Antitrust, Commercial and Administrative Law hearing on "Online Platforms and Market Power" in this screengrab made from video as the committee meets on Capitol Hill, in Washington, U.S., July 29, 2020.

Watch the hearing by clicking on this link: Bezos, Zuckerberg, Cook and Pichai testify before House

Read also: Amazon Sales in 2020 Are Skyrocketing Amid Coronavirus Pandemic, But Warehouse Workers' Safety at Risk?

This article is owned by TechTimes. To learn more, visit https://www.techtimes.com/