Enigmatic 'Heartbeat' from Cosmic Gas Cloud Powered by a Black Hole? Could It Be Marvel-Baddie Galactus?

The Milky Way galaxy is home to various cosmic entities that scientists only begin to study and identify.

A mysterious cosmic gas cloud produces an enigmatic 'heartbeat' that scientists hear, having a co-relation with a distant black hole that is in sync with the rhythm it provides. The cloud is located near the constellation of Aquilla and is 100 light-years away from the black hole, stated by Independent.

Emerging new forms of space objects amaze and mystify scientists but also leads them to take caution and carefully monitor it.

According to Desy's website, the new space cloud is discovered by a group of researchers led by Deutsches Elektronen- Synchrotron or DESY Humboldt's Jian Li and ICREA Professor Diego F. Torres from the Institute of Space Sciences (IEEC-CSIC). The team is composed of scientists and experts from the U.S., Germany, Spain, and China. The researchers published their study in the Nature Astronomy journal.

The data from NASA's Fermi gamma-ray telescope picked up the cosmic cloud's data, which the researchers then studied and discovered the phenomenon. The telescope is focused on the so-called 'micro-quasar.' A microquasar is a smaller version of a quasar star system with a black hole or neutron star in its area.

ALSO READ:  The End of the Universe: One Researcher's Theory on How the Universe Will Die--and When

Where is the Cloud and What exactly is it?

Fermi Telescope is focused on the system named SS 433 with a distance from the planet of approximately 15,000 light-years away inside the Milky Way Galaxy. This system is seen to contain a giant star that is 30 times more than the mass of the Solar System's sun and a black hole that has 10 to 20 solar masses. 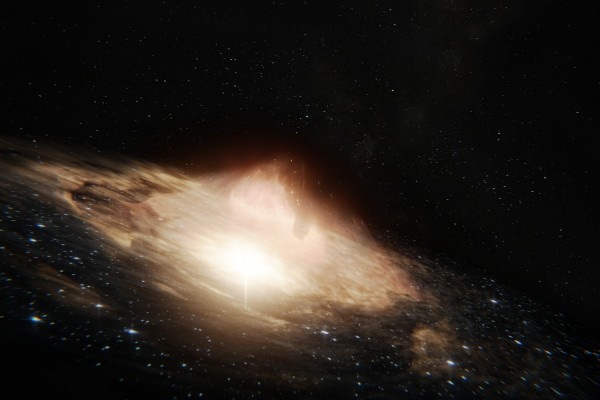 The system's black hole is seen to suck on the giant star's solar mass and is recognized by the gamma telescope to orbit each other in 13 days. A black hole is a region of space with a vast gravitational pull so intense that no form of matter or even light can escape. "This material accumulates in an accretion disc before falling into the black hole, like water in the whirl above the drain of a bath tub," Li said. "However, a part of that matter does not fall down the drain but shoots out at high speed in two narrow jets in opposite directions above and below the rotating accretion disk." Instead of traversing a straight line in space, the materials seen by the telescope show that the black hole's jets to form an orbit and go around creating an accretion disc.

The scientists who studied the telescope's data found a sighting that emits gamma-rays, 100 light-years away from the microquasar. Fermi J1913+0515 is the location where the gamma-ray is found but portrays a cosmic cloud in the area. Scientists believe that the microquasar nearby powers the cloud's emission. "Finding such an unambiguous connection via timing, about 100 light years away from the micro quasar, not even along the direction of the jets is as unexpected as amazing," says Li. "But how the black hole can power the gas cloud's heartbeat is unclear to us." Scientists still find it unclear why the cosmic cloud is in sync in the black hole's rhythm of 'heartbeat.'

IGN gathers several comedic speculations from Twitter that suggest that the cosmic cloud is one of Marvel's primary villain, Galactus, brought by 2020's long list of surprises for the month of September.