Elon Musk is Glad that Tesla Driver is Okay After Horrific Crash— Fan will buy Model 3 Again After Walking Away Unharmed!

The world-renowned electric vehicle manufacturer, clean energy company, and creators of the alleged 'Safest Vehicles on the World,' Tesla, proves itself again after a horrific crash on Switzerland totals the whole front bumper and windshield of a Model 3, with the owner walking away without a scratch and unharmed. Elon Musk notices the tweet and is glad that the driver is okay. 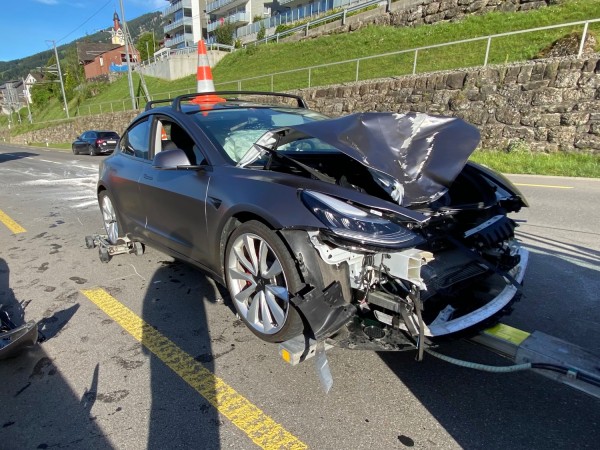 Tesla is now receiving compliments from a driver who experienced a life-threatening crash in Switzerland, driving his Model 3 when suddenly getting caught up in a horrific accident. The drive has no fault or error, nor was the perpetrator, as both were just involved in an unlucky accident that renders the car unusable.

Tesla Safety: A Testimony from a Driver's Horrific Crash

There are little chances when a person would encounter a truck, or even a car, that will have its tires being removed from its bolts and flying randomly all over the highway. This case, however, went true for a Twitter user named Mike (@Mike94160775) who recently shared his experience on the short word social media.

Mike said that as he was cruising down the highway at a reasonable speed of 80 kilometers per hour, when a crossing truck, also traveling the same rate, suddenly experiences an unintended accident. The speed would not be that dangerous if the conditions were only driving down a spacious highway; however, when losing one part of the vehicle at that speed could be lethal.

The driver estimates that the flying wheel that totaled his vehicle has an accumulated speed of 160 kilometers per hour, doubling the speed both cars have when driving. Fortunately, the driver was able to stop the damaged vehicle without colliding with other cars and finally exiting without any scratch or harm.

Elon Musk (@elonmusk) notices the tweet that was tagged to him and shared his feelings with the driver.

The Tesla Owner did not stop there. His amazement and gratefulness to Tesla saving his life led him to create a 'video presentation' documenting how the electric vehicle saved his life during the unfortunate accident from a truck with its wheel flying toward the driver.

The video shows how the rampaging wheel collided with his front bumper, coming from the truck in the opposing traffic. All of Tesla's built-in body cameras show the different angles of the crash, from the front that captured the collision and to the backs and sides that show the truck skidding away without its wheels.

In the video, Mikethe Bike, captions that his video is proof and testimony of the level of 'real-life' safety the car offers. The accident happened almost several weeks ago, but the CEO only notices the tweet now. Despite the horrific experience, Mikethe Bike felt safe and secure in his Tesla and claimed that he would buy another Model 3 as his car of choice.