Last week, the "most powerful man in the world" US President Donald Trump was diagnosed with positive Coronavirus. Since then, the president took a number of different drugs. At the time, the official Presidential physician has not yet announced the names of his prescription. However, after the President said that he's feeling much better, everyone wants to know how it happened.

(Photo : Photo by Chip Somodevilla/Getty Images)
Republican presidential candidate Donald Trump gives two thumbs up to the crowd during the evening session on the fourth day of the Republican National Convention on July 21, 2016 at the Quicken Loans Arena in Cleveland, Ohio. Republican presidential candidate Donald Trump received the number of votes needed to secure the party's nomination. An estimated 50,000 people are expected in Cleveland, including hundreds of protesters and members of the media. The four-day Republican National Convention kicked off on July 18.

After spending three nights at Walter Reed Medical Center, President Trump immediately returned to the White House. On the same day of his return, he even tweeted "don't be afraid of COVID."

Since then, everyone wants to know how POTUS successfully beats the virus. Then, a name of an experimental antibody cocktail produced by biotech company Regeneron, popped in.

However, this drug is not the only medicine that President Trump took during his time in the hospital. Here are some of the drugs, as explained via BBC and CNet: 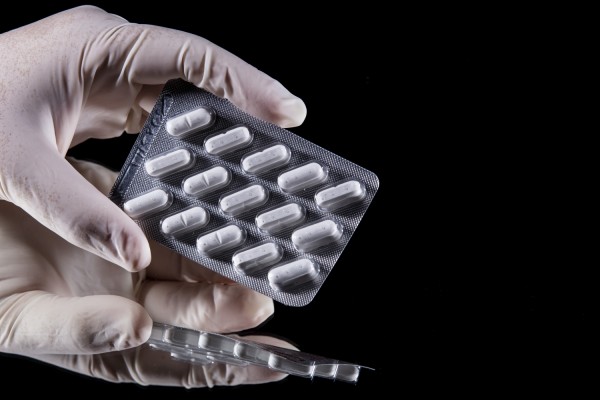 (Photo : Photo illustration by Buda Mendes/Getty Images)
In this photo illustration, tablets on a blister pack of Plaquinol (Hydroxychloroquine) are displayed on April 10, 2020 in Rio de Janeiro, Brazil. Controversial hydroxychloroquine is being suggested as a potential medication that could treat the Coronavirus pandemic in Brazil. According to the Ministry of health, as of today, Brazil has 19,638 confirmed cases infected with coronavirus (COVID-19) an at least 1057 recorded fatalities.

The Regeneron's antibody cocktail also known as REGN-COV2 is a mix of neutralizing antibodies. These antibodies prevents SARS-CoV-2 of hijacking the human cells.

Humans have these type of antibodies, however, it takes sometime for the immune system to develop these. Thus, through putting the Regeneron's antibody cocktail inside the body, it will benefit the patient.

Interestingly, the cocktail drug is still being studied in three more Phase 3 trials, making it more controversial by the public.

Remdesivir, a drug developed by California's Gilead Sciences, was also included on the President's drug mix.

Trump reportedly receives five doses of Remdesivir, according to his physicians. This may not be surprising since this drug was officially FDA-approved for emergency-use authorization.

Remdesivir is not specifically meant to treat Coronavirus. It was first developed to treat Hepatitis C and combat Ebola.

As explained via BBC, Dexamethasone is a steroid drug that mainly calms the immune system. In the United Kingdom, several cases that the drug went effective were on the people that needs oxygen.

Trump's blood oxygen level were not sustained properly during his hospitalization wherein it dips 94%. Dexamethasone's side effects include anxiety, altered mood, and cognitive impairment.

As said, President Trump has now successfully went home to White House. He even tweeted a video speaking to the public of his condition.