'Fortnite' Black Widow Cup Rules: How to Compete, Get Skins, Rewards, and Everything We Know

Epic Games has announced the arrival of another "Fortnite" Cup after the Daredevil and Ghost Rider Cups, and this time, it will feature Natasha Romanoff, aka the Black Widow. 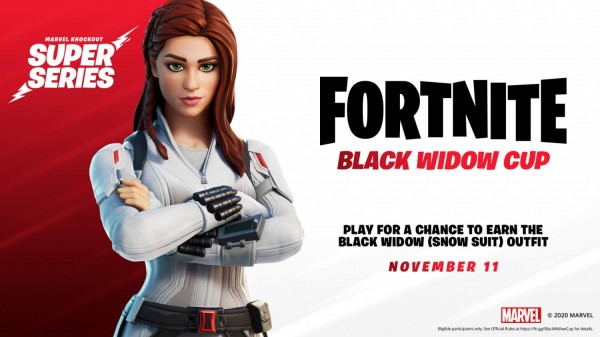 (Photo : Epic Games)
Players who rank in the top 800 can get a chance to earn the new Black Widow outfit.

The Black Widow Cup is Here

According to the blog post by Epic Games, the Black Widow Cup will commence this Wednesday, November 11, and if players, with their Duos partners, could gain enough victories together, they have the chance to earn the rewards for this Cup: the all-new Black Widow Outfit (Snow Suit) and a Back Bling, which they could get for free before these items arrive in the Item Shop.

As per ComicBook, the skin was designed to coincide with the Marvel character's design for the upcoming "Black Widow" movie, the first Marvel flick for the titular character.

For "Fortnite" players who want to compete, the developers have also announced the scheduled start times based on the regions:

As soon as the Black Widow Cup starts in your region, you can go to the Game Lobby and check out the Compete Tab, where you can see the event playlist.

So, who can join the Black Widow Cup?

Epic Games noted that only "Fortnite" players who have reached level 30 could participate, plus they also should have set up the game's 2-Factor Authentication--and of course, players should have their buddy all geared up and ready for the Cup.

For those who haven't logged in the game for quite a while, the Black Widow Cup is part of the Marvel Knockout Series that was announced a month ago, which includes four different Cups, all of which are based on a different Marvel character.

The Marvel Knockout series is a spin on Operation: Knockout, a mode Epic introduced wherein players have to try and beat other teams in a tournament bracket in a four-round knockout battle. Each round, players will have a different set of superpowers that they can use against their opponents, who will have mirrored abilities.

According to FortniteInsider, the Cup will end with a whopping $1 million prize pool for the Super Cup, which will begin on November 21, but there is still another Cup starting next week before the grand finale.

Epic did mention the final event before the Super Cup, and it will feature a mystery Marvel character, who may or may not be a villain, which is slated to commence on November 18, right after "Fortnite" fans try to outrank other players in the Black Widow Cup.

So far, fans have been loving the entire "Fortnite" season with its Marvel-themed events and items.

If you want to join in the fun, "Fortnite" is available on all major platforms, including PS4, Xbox One, PC, and Android devices.