Scientists Find Answers to 16-Year-Old Mystery, The Blue Ring Is Not Blue, Not a Ring Either!

For years, astronomers have been trying to find the answer on a 16-year old mystery about space object with a blue light surrounding it.

Finally, after analyzing images taken with telescopes both on the ground and in space for years, scientists believe they already know how the blue light and the spectacular object was formed in distant space. 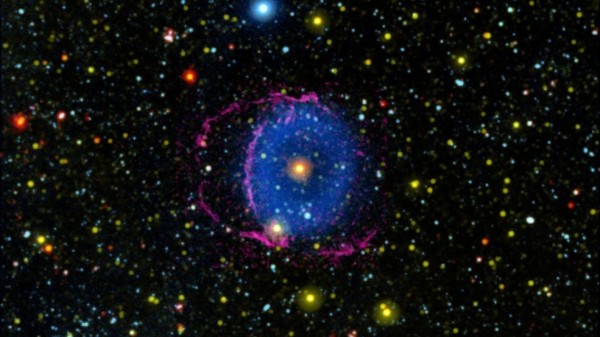 Blue ring: Not blue and not a ring

Unfortunately, scientists found that the object's ring is not really blue. Instead, the color is only a representation of the glowing light around the object. They also say it was different to what they had seen before.

The study published in the journal Nature on November 18. This is the first time astronomers have seen the evolution of stars in rare phase occurring a few thousand years since they began and lasts only for a short period - about thousands of years.

Astronomers also noted that the object is not really a ring, but a cone. They think the fluorescing debris may have probably formed a cloud after a sun-size star swallowed a smaller one. It appears to be a ring as one of the cones is facing the Earth directly.

While both stars began floating in space, the bigger one expanded and came closer to the smaller one, which began drawing off matters from the former.

Once the smaller star has been was consumed, the two stars would collide and form a cloud of debris, which was divided by a gas disk released from the smaller star. This creates two cone-shaped clouds of debris.

After which, the debris' hydrogen molecules were later excited by the shock wave, which causes them to glimmer with ultraviolet light and glow with a blue-like ring.

Keri Hoadley, the lead author of the study from Caltech's David and Ellen Lee Postdoctoral Scholar in Physics, said that it is pretty common for two stars to merge. However, they would easily become obscured due to huge amount of dust once the ejecta they released expanded and cooled in space. This means the actual events is not visible from the Earth.

Hoadley also noted that the object shows a late phase of the transient events as "the dust finally clears and we have a good view." Meanwhile, the scientists also said they also witnessed the process before it. "After time, the nebula will dissolve into the interstellar medium, and we would not be able to tell anything happened at all," Hoadley added.

Read also: NASA Will Send Your Lost Loved Ones to Outer Space! The Space Agency Offers Moon Burial for 2021

Scientists have been puzzled for years since the event was first spotted. A Carnegie Institution for Science astrophysicist and a member of the GALEX team Mark Seibert said they thought they had figured out the and solved the mystery, but later on, they would find something that tells them what they are doing is wrong.

"That's a scary thing as a scientist. But I also love how unique this object is, and the effort that so many people put in to figure it out," Seibert said.

Scientists came up with numerous theories about the source of the object. First, scientists tried to find evidence of a shock wave surrounding the star that proves a gas cloud was sent in space. They used Caltech's Hale Telescope at Palomar Observatory in California and W. M. Keck Observatory in Hawaii.

Then, they thought the star may be destroying an unseen planet nearby. However, the 2017 Habitable Zone Planet Finder data showed there was no object that orbits the star.

While it took years to discover what causes the blue rings, new technology may reveal new information in the future.