The Game Awards 2020 Nominees and Predictions: Ghost of Tsushima Vs The Last of Us 2

It's that time of the year again when the gaming industry gathers (perhaps virtually this 2020) to give awards to the games released this year that made a huge difference in the industry. 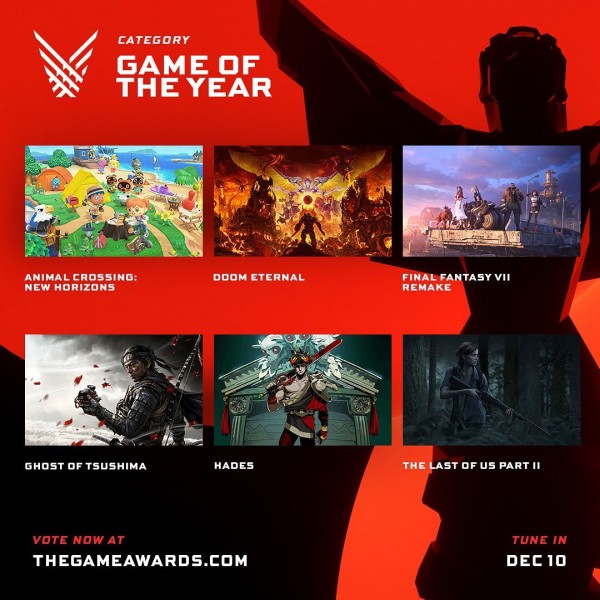 (Photo : The Game Awards / Facebook)
Here are the nominees for the Game of the Year award.

Game of the Year 2020 Nominees

There are different awards for the best narrative, game direction, art direction, and more. But what the fans are more excited about is the Game of the Year award, which is practically the counterpart of the Best Picture award in the Oscars.

Each year, there are six nominees, and here are this year's nominees for The Game Awards' Game of the Year award:

Nintendo often has at least one game on the list for most years, and this time around, it's "Animal Crossing: New Horizons," an online multiplayer simulation game that has been a massive hit on Switch this year, especially as it helped players socialize when everyone was stuck at home.

The remake of the iconic Japanese role-playing game "Final Fantasy VII" has been widely loved by the fans, both new and old.

The hype around this JRPG remake has gone quiet for some time after the first few months after it was launched, but it's one of the most highly-anticipated games of 2020, and until now, fans are waiting for some information on episode 2 of the remake.

Read More: Computer Scientists Create Ultimate Cheat-Detection System That Can be Used in Any MMO Game

Paul Tassi from Forbes chose "Ghost of Tsushima" as the frontrunner in the race, and it's really hard not to, given that Sucker Punch has done a fantastic job in creating the game, from its visuals to its engaging story to the combat.

Plus, the upcoming multiplayer mode coming this holiday season is sure to bring the hype back around the game.

The sequel for the "DOOM" reboot that launched this March. It's a first-person shooter that fans deemed as "brutal and exhilarating," plus the franchise does have some avid fans, making its launch another highly-anticipated return to the "DOOM" universe.

This time, Earth is overrun by demonic forces, so players assume the role of Doom Slayer to fight off the invasion.

The only indie game on the list is "Hades" from developers Supergiant. They may seem like the underdogs, but "Hades" is actually another frontrunner in the race. It's a roguelike action-role playing game where players control Zagreus, the son of Hades, in his journey out of the Underworld to reach Mount Olympus.

It has a compelling story that Greek mythology fans will love. But more than that, it has addictive combat that fans seem to love.

There's quite some controversy with "The Last of Us 2," and the gaming industry is quite divided with whether it should win the Game of the Year award or not. But it's Naughty Dog's highly-anticipated sequel to the highly-successful first game, so it's not a surprise it's on the list.

There's still the compelling story that fans love and the familiar gameplay and terror when dealing with the infected.

Game of the Year 2020 Predictions

Now, it's time for the predictions--and as said, there's a divide in the gaming industry with what they think will win the award.

However, most of the predictions were made months ago, when The Game Awards 2020 nominees haven't been announced yet, but if anything, even people back then were betting on some of the biggest games to have arrived this year and are on the list, namely "Ghost of Tsushima" and "The Last of Us 2."

Some were betting on "Animal Crossing: Horizons," but there are quite a number of people who were betting on "Cyberpunk 2077," but unfortunately, CD Projekt had to delay its launch a few times and it's still about to launch as of writing.

For gaming enthusiast Tristan Ettleman, the winner for the Game of the Year award should go to "The Last of Us 2."

The race is unpredictable this year, but one thing is clear: fan favorites "Ghost of Tsushima" and "The Last of Us 2" are the clear frontrunners based on popular opinion.