Scientists from the Durham University and University of Glasgow worked together in developing simulations using supercomputers that may explain how the Moon may have formed after a collision between the Earth and Theia, a Mars-sized planet about 4.5 billion years ago.

According to Daily Mail report, the simulations are developed within the DiRAC High-Performance Computing facility, which includes a vast collection of supercomputer, wires, processors, and other hardware that distributed among four university sites such as Durham. 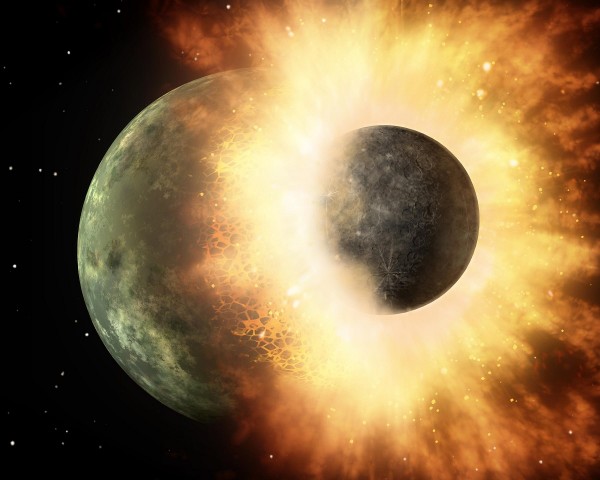 (Photo : NASA)
Scientists Develop Supercomputer Simulations Showing Collisions Between the Earth and Mars-Sized Planet Theia – Is This How Moon Was Formed?

Supercomputer Simulations may explain how the Moon is formed

The study author, Durham University professor Sergio Ruiz-Bonilla, said they created the simulations after adding various amounts of spin to Theia or having no spin at all, which gave different outcomes as to what might have occurred when Earth was hit by a massive planetary object billions of years ago.

Ruiz-Bonilla noted that some of their simulations have produced an orbiting clump of material, which is a little smaller than the Moon. However, the scientist theorized that after a disc of material is added around the Earth after the collision, the clump would grow bigger in mass after some time.

The collision simulation between the Earth and Theia produced varying results depending on the direction and speed of the latter's spin. From having no spin at all, researchers gradually added spin on Theia in both clockwise and counter-clockwise movement.

"I wouldn't say that this is the Moon, but it's certainly a very interesting place to continue looking," Ruiz-Bonilla added.

During the simulations, scientists traced the rocky materials that would have burst from the collision, formed together, and created the Moon. Meanwhile, after adding the maximum speed on clockwise spin, the collision even merged both objects together. In contrast, a maximum counter-clockwise spin led to a hit-and-run impact.

There are numerous hypotheses on how moon was formed, but some scientists believe the Earth's nearest neighbor was created after our planet collided by another Mars-size planet billions of years ago.

This theory is called the Giant Impact Theory or the Big Splash. It claims that the moon is built from debris from the collision between Earth and another planetary body, which is called Theia. It was named after a mythical Greek Titan who was the mother of the goddess of the moon, Selene. Some scientists refer the theory as the Theia Impact.

Since humans first set foot on the Moon about 50 years ago, the Apollo program has always been recognized as both technological and political triumph. However, the nearly 900 pounds of lunar samples that Apollo astronauts brought to Earth proved to be the greatest scientific win as these samples have been vital to providing answers on how the Moon was formed.

(Photo : Monthly Notices of the Royal Astronomy Society)
Collision animation may explain how the Moon is formed

Based on the study published in the journal Monthly Notices of the Royal Astronomy Society, scientists were able to plot the impacts of the different spin rates applied on Theia.  Looking at the figure above, Theia is represented by the yellow planet while the black arrows are the different spinning rates.

The two figures in the left resulted in mergers while the middle box shows no spin added to Theia, which produced a self-gravitating clump with only about 80% of the Moon's mass.  The images second to the right resulted in creation of orbiting clumps or what seemed to be moon candidates. In contrast, the far right box led to a hit-and-run.

Moreover, after adding a little amount of spin, there was another Moon-like object created, which was seemed to orbit around the post-impact Earth. Also, the simulated clump had a small iron core, which is similar to the Moon's as well as an outer layer of materials formed from Theia and the early Earth. It is possible to have grown with the help of a disc of debris that surrounds the Earth.

Another study author from Durham University's Dr. Vincent Eke said that they got different results depending on the spin added to Theia before it crashed into the Earth. "The impact with the early Earth leaves a trail of debris behind, which in some cases includes a body large enough to deserve being called a proto-Moon," he added.

Eke also noted that a number of collisions may have happened in the past that scientists would need to investigate as such could lead them "closer to understanding just how the Moon formed."