The National Aeronautics and Space Administration's (NASA) next Mars rover, named Perseverance, will be landing on the Red Planet in three week's time, and for those who want to see the event for themselves, the space agency has created an awesome interactive simulation for everyone. 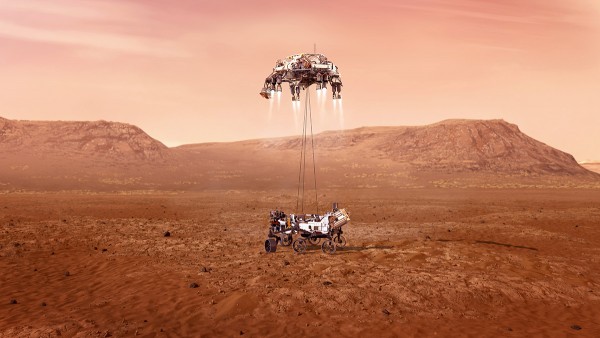 (Photo : NASA's Perseverance / Twitter)
The simulation shows every stage of the landing until the rover lands on Martian soil.

According to Digital Trends, Perseverance's 300-million-mile journey that started in July 2020 will finally come to an end on February 18, when it's expected to enter Mars' atmosphere and land soon after.

To everyone curious as to how the event will unfold, NASA has created the interactive simulation, which shows every bit of the process, from the rover's planned entry, descent, and ultimately its landing stages until it hits the Martian ground to start its duty.

Anyone who wants to see and learn more about Perseverance's descent to Mars can access the simulation via NASA's website here.

The space agency recommends anyone who wants to check the simulation to have a fast broadband connection as well as decent hardware that runs on the latest software to guarantee the simulation runs smoothly.

It should be viewable via your desktop or laptop's web browser as well as your dedicated mobile web browser.

The Different Stages of the Rover's Landing

As the simulation loads, viewers should be able to move the camera around, changing the angle to see every bit of the action, or you can choose to zoom in and out on the rover for a better view, plus you can also watch the entire thing happen in real-time, as what NASA engineers and scientists expect, or you can slow it down or speed the whole process and even do it in reverse.

Get ready to ride! Try out our 3D, interactive simulation that lets you experience each step of @NASAPersevere’s Feb. 18 Mars landing from every angle: https://t.co/w67OdKPXef pic.twitter.com/hVjPHAekeY

You can access the next stage by simply scrolling up.

Every stage has a description of what would happen and when in the countdown it's expected to occur, such as the rover's shedding of the cruise stage, which houses the solar panels and the fuel tanks of the spacecraft, dropping a few more masses, its entry to Mars' atmosphere, and more, up to the moment the rover lands safely.

NASA's Jet Propulsion Laboratory, which is overseeing the mission, says the entire process would be a "harrowing" experience for both Perseverance, and the team waiting back here on Earth for a successful landing.

Perseverance has been sent to the Red Planet for a mission: to search for any evidence of ancient life on Mars as well as to gather as much information as possible about the planet.

The latter will be to help scientists and engineers with future Martian explorations set to happen within this decade.

Elon Musk, SpaceX's CEO, is also planning to create a domed city on Mars in the foreseeable future, so anything the rover fins would be incredibly helpful for future generations.

Besides the landing of Perseverance, NASA and space fans are also expecting the success of the first-ever flight of an aircraft on another planet as the space agency's Ingenuity helicopter, which is flying with the Mars rover, will take off from the Martian surface for its maiden flight.