With the technology we have today, it is still challenging for scientists to have a closer look at surfaces of near-Earth celestial objects, but thanks to an upgrade done to a radio telescope in West Virginia, scientists were given an unprecedented look at the moon. 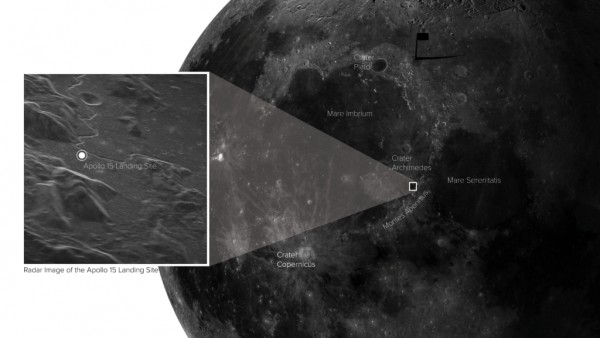 (Photo : Sophia Dagnello, NRAO/GBO/Raytheon/AUI/NSF/USGS)
The radio telescope signals were able to create high-quality images of the surface of the moon.

According to Futurism, the Green Bank Telescope had been upgraded with a new radio transmitter that was developed by military contractor Raytheon.

Through the new upgrade, the GBT was able to send out radio signals, which is then received by the continent-wide, 27-antenna system in Hawaii known as the Very Long Baseline Array (VLBA), and experts used the data acquired from the radio telescope to make high-resolution radar imagery of the Apollo 15 landing site on the moon.

The image was able to show objects that were as small as five meters across.

The success of the upgrade and the images caught of the moon's surface is a culmination of two-year research.

Before the upgrade was done, the steerable radio telescope was only a receiver of radio signals.

Plans to Build a Bigger System

"When the reflected signal comes back, you can use it to create an image of the object the signal was bounced from," said Dave Finley, a spokesperson for the National Radio Astronomy Observatory, in an interview with the Albuquerque Journal.

The signals that were captured were able to create the highly-detailed image of the moon's surface was done in a proof-of-concept test, and since it proved to be successful, scientists are hoping to create a 500-kilowatt radar system with the data they have collected.

The new upgrade would then include a much beefier transmitter that should be enough to capture surfaces of more distant planets in our solar systems such as Uranus and Neptune.

"The planned system will be a leap forward in radar science, allowing access to never before seen features of the Solar System from right here on Earth," said Karen O'Neil, the site director of the Green Bank Telescope, as per SciTechDaily.

Furthermore, Finley said that they should be able to create 3D images of the surfaces of other planets by using multiple and widely separated antennas of the VLBA that will "receive the reflected signals."

No Final Design Yet

However, Finley said that the final system had not been designed yet, so they are still unsure how much it would cost them and when it would be started, and how long it would take for them to complete.

Experts such as engineers and astronomers are still working together to fine-tune techniques and processes to process the data.

The project would help experts here on Earth with future space explorations within our Solar System and provide more data for research purposes.

As of now, understanding our very own system and the beginning of the universe remains a million-dollar question that no one has answered. As scientists do research projects in astronomy and space exploration, we might be able to get some answers to some questions in the future.

Related Article: Self-Sufficient 3D Printed Robots from the ARE Project: How They Can Help in Future Space Explorations