The National Aeronautics and Space Administration (NASA) has announced that it has awarded the contract to launch the initial elements of the lunar outpost for its Artemis mission to the Space Exploration Technologies (SpaceX), which is owned by multi-billionaire Elon Musk. 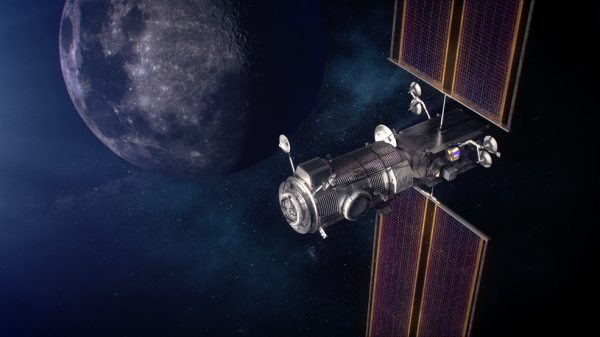 According to the NASA blog, SpaceX will be lending its Falcon Heavy rocket to the United States space agency to deliver the agency's Power and Propulsion Element (PPE) and the Habitation and Logistics Outpost (HALO), which are the initial elements of the Gateway.

The outpost's foundation will be built by Maxar Technologies and Northrop Grumman Space Systems, respectively.

Based on the announcement, NASA is planning to launch both the PPE and HALO in March 2024.

They are expecting to launch SpaceX Falcon Heavy containing both the elements from the Kennedy Space Center in Cape Canaveral, Florida.

The overall cost for the mission is nearly $332 million, which already includes the launch service and other mission-related costs, as per the space agency.

The Foundations of the Gateway

The PPE is a 60-kilowatt class solar electric propulsion spacecraft that will provide cosmonauts under the Artemis mission with power, attitude control, high-speed communications, and can also be used to control the Gateway to different lunar orbits, which should make it easier to access different points of the moon.

Meanwhile, the HALO is a pressurized living quarter where the astronauts who are visiting the Gateway will reside and work.

The HALO will serve as the docking outpost and the command and control center.

A Pit Stop to the Moon

The Gateway, which is roughly one-sixth of the size of the International Space Station (ISS), will then be the first long-term orbiting outpost around the moon and will be vital for the upcoming Artemis mission, providing sustainability and support for the astronauts that will be taking part in the expedition on the lunar surface.

Furthermore, it will serve as a pit stop before reaching the lunar surface.

The European Space Agency (ESA) will also be collaborating with NASA and will provide the service module for the Gateway, which will include vital life support elements such as water and oxygen, temperature controls, and electricity.

ESA officials wrote in their website that the life support systems they will provide to the Gateway can support astronauts for 90 days at a time.

As of now, NASA has paused the search for a human landing system that will be transporting cosmonauts from the Gateway to the moon, but it is expected that reviewing for the bids will resume soon.

This is the second contract awarded to SpaceX this week, with the first as the $98.8 million worth contract to launch NASA's SPHEREx astrophysics mission.