On Monday, March 22, the OG ESports team for "Dota 2" roster has released a heartfelt tribute to one of its most iconic players that centered on Solo Mid Lane, Yeik "MidOne" Nai Zheng, who left the team recently.

The loss of one of OG's most iconic gamers is truly devastating to the team and its fans, but the company would focus on getting a "breath of fresh air."

As suggested by Nai Zheng's in-game name for OG, he was a phenomenal mid-laner for the team, focusing on carrying and heavy-hitting characters from "Dota 2's" roster of heroes that have been around since its release. Iconically, mid-laners are solo players that focus on getting the most out of the gameplay and make or break the team's match.

The former mid-laner and mainstay in the group have finally bid farewell, and this comes during the team's low point, especially as previous matches have been rough and difficult for the team. MidOne's legacy has brought the team massive recognition in the world of "Dota 2" e-Sports, particularly gaining a tremendous fanbase for the team. 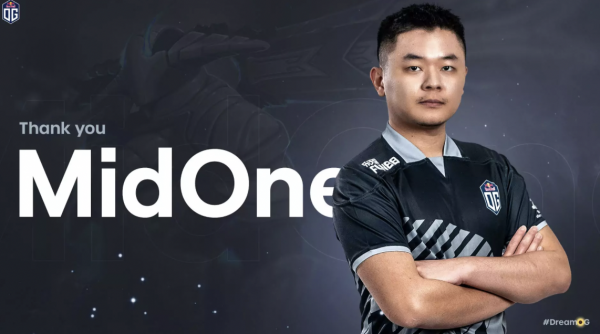 According to OG Esport's recent post, it is not a bitter goodbye for MidOne, rather, a friendly farewell that wishes nothing but the best for the e-Sports professional gamer from Malaysia. The company has expressed their "heartfelt" gratitude for Nai Zheng, especially for bringing the team to several international competitions that gained them recognition.

In MidOne's career, the team was able to get to two championship matches for Valve Corporation's "Dota 2," along with Grand Finals bout and taking home the title. MidOne is known for being a phenomenal mid-laner, but was later forced to switch to an offlane carry, ultimately pushing him to learn new heroes and adjust for his teammates in OG.

MidOne and OG have shared a lot of e-Sporting events, through the ups and downs, along with the recent pandemic that empowered the realm of gaming, and has transported it to purely the online world. Yeik Nai Zheng also performed some of his games offshore, being in his home country, Malaysia, and still delivering his performance to the team.

OG mentioned that MidOne has been using the Heroes Sven and Spectre, which are both known as carry characters that have been a massive key to MidOne's performance for the team. Additionally, MidOne is also known for his stint as the Geomancer, Meepo, who is one of the most complicated carries in the game but is a hunk in mid to late games.

Sometimes even when you gave it your all, an adjustment is still needed.@midonedota2's talent and mischievous energy brought immense amounts of joy to everyone around him.

We all thank him immensely for everything he did for us.

Former teammates and superiors in OG E-Sports have also bid their farewell to MidOne, wishing nothing but the best and a fruitful career ahead of the Malaysian "Dota 2" Professional gamer. The team is on the verge of looking for new blood to replace MidOne, as they carry on and aim for the trophy in the next "Dota 2" Major Championships.

Related Article: 'Finger on the App 2': Mr. Beast Says He Will Offer Refunds After Bug Issue - How to Join?