NASA on Apr. 8 released a breathtaking photo of a sea of dunes taken from Mars' North Pole.

The photo's release, which was aptly titled "Blue Dunes on the Red Planet," is part of a special set of images marking the 20th anniversary of the Mars Odyssey orbiter.

The sea of dark dunes, located 80.3 degrees north latitude, 172.1 degrees east longitude on Mars, covers an area 19 miles (30 kilometers) wide, which is as big as Texas.

The stunning photo was one of the images taken by the Thermal Emission Imaging System instrument loaded on the Mars Odyssey orbiter during the period from December 2002 to November 2004.

Launching 20 years ago on Apr. 7, the Mars Odyssey orbiter was sent to map the composition of the Martian surface to give scientists insight on how the red planet evolved over the years.

The oldest working spacecraft had proven its usefulness in other areas of NASA's research, as it served as a crucial communications link for other spacecraft, leading to safer landings of other Martian missions. 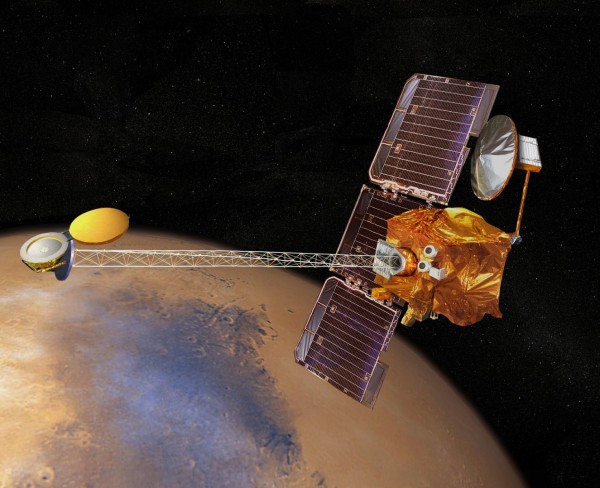 As part of the Mars Relay Network, the Mars Odyssey orbiter served as a long-distance call center for NASA's rovers and landers, supporting over 18,000 relay sessions since it launched.

Rovers traversing Mars' surface were able to send fresh images back to Earth faster with the orbiter's help.

The Mars Odyssey orbiter had also uncovered troves of water ice on the Martian surface, which helped scientists understand the water cycle on Mars.

"Before Odyssey, we didn't know where this water was stored on the planet," said Jeffrey Plaut, Project Scientist of NASA's Jet Propulsion Laboratory in Southern California.

"We detected it for the first time from orbit and later confirmed it was there using the Phoenix lander," he added.

Additionally, scientists were able to piece together complete global maps of Mars through the use of Odyssey's infrared camera, the Thermal Emission Imaging System (THEMIS).

By measuring the daily surface temperatures, scientists were able to identify physical materials that comprise the red planet.

The data collected by Mars Odyssey's two decades of service allowed scientists to map valley networks and craters, which led to them spotting iron-rich rocks, salts, sandstones, and more.