'Smite' Gilgamesh Guide: How to Play Him, Roles, Abilities and Best Builds

"Smite" players are currently testing the newly-featured warrior in the game, Gilgamesh. Following his official release on Tuesday, Apr. 20, several experiments about this character are happening, but is there an effective way to awaken this colossal god?

For those who want to use Gilgamesh effectively, you could follow this short game guide about his roles, builds, itemization, and other important things. 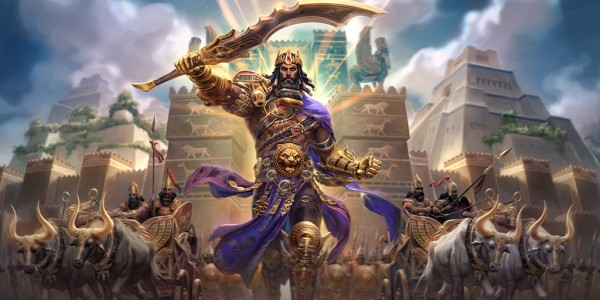 According to Gamepedia, the story of the mighty god Gilgamesh produced mixed kinds of stories ranging from good to bad, and from true to false. Across the Mesopotamia where he reigns, people have different say about either his arrogance or heroism.

As the tales reached the land, he was known for his brute strength which he uses to kill monsters and his enemies. Somehow, what he brags about the most is the immortality that he possesses. He also has connection with Tiamat, who just arrived last February.

The #KingOfUruk Update has begun!

We expect the Update to take a couple of hours, and we will let you know when the Update is live with Gilgamesh! https://t.co/RJ603YTIQY

Possible Roles for Gilgamesh in 'Smite'

In running this warrior, you could consider playing him as a solo or a jungle hero. If you have just started exploring Gilgamesh's capabilities in combat, you might enter first in solo to know more about his abilities and proper itemization which depends on the situation.

After utilizing him in a solo lane, you could now move to the jungle option which could open a lot of opportunities in his skills. However, you might find some of them lacking, but this could vary from one player to another.

He is a right-click type warrior which relies on his first skill buff. The Drop Kick, his second ability helps him to clear lanes faster. You can also use it to jungle while you are not in the lane.

When it comes to this third ability, this is a good boost for your allies' life-steal and move speed. However, it could have been better if it lowers the enemies' armor or debuffs them. This concludes why Gilgamesh is not a fitting character for support.

There are few options that you might choose for him. If you want to activate his high attack speed, you might need to fill up his first ability. This will also turn him into a somehow tanky warrior.

Meanwhile, his third ability will also be a big help for him. He would be granted a bigger hp. You could run a Sun-forged Scimitar in his skill build as well as the Hero's Advance and the Drop Kick, but you could also consider leveling up Winds of Shamash, his ultimate.

If you want to be an early dominator in the lane, you could prioritize Drop Kick. Next, you could now add Sun-forged Scimitar, and lastly the Hero's Advance.

There are instances that the Hero's Advance will be the last ability that you should consider besides your move speed. But, remember that Sun-forged Scimitar and Drop Kick should be your priorities in his skill build.

Gamepur has a separate guide for Gilgamesh's best build but let's see for a while how he will fare the lanes with his items. Most likely, you would like to focus on his life-stealing tool while also prioritizing attack-speed items if you want to play him as a solo or jungle role.

If you want to go for the swift-type attacker, you need to improve the attack speed of Gilgamesh. At the same time, you need to assure that he is also getting a decent life-steal and protection (physical and magical) during the clash.

The suggested item for his life-steal will be the Soul-eater. For this attack speed improvement, you might want to test The Crusher which goes along with some of his abilities.