Signal Reveals Too Much Truth About Facebook Ads, Gets Banned From Running Ads

Signal tried to run ads on Instagram that reveal too much truth about Facebook ads methods. But the latter, seemingly "not into that idea," banned the former from running any ads, Signal's blog site said.

"The Instagram ads Facebook won't show you," the blog goes on to say, is meant to show a clearer picture of how the tech giant capitalizes on user's data. But it was blocked before it even saw the day of light. 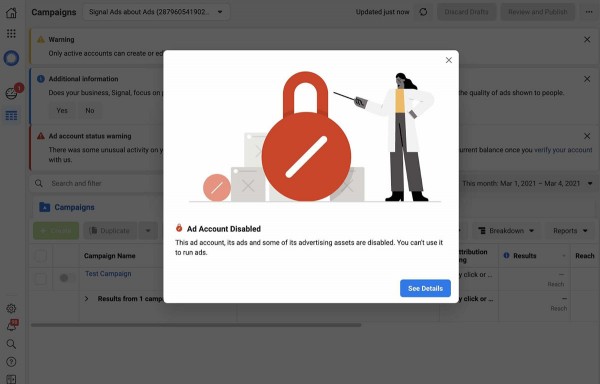 (Photo : From Signal's official blog)
Signal tried to run ads on Instagram that reveal too much truth about Facebook ads methods.

Furthermore, the campaign used the same highly targeted method Facebook and Instagram are using. Signal tried to buy, what it dubbed as, "multi-variant targeted ad" to illustrate how the social media giant collects and sells access to users' information.

The ads were supposed to display, Signal further says, "the information collected about the viewer which the advertising platform uses."

How Honest is the Ad?

One of the ads, intended to be seen on Instagram said: "You've got this ad because you're a K-pop-loving engineer. This ad used your location to you're in Berlin. And you have a baby. And just moved. And you're really feeling those pregnancy exercises lately."

Alarmingly, the ad showed excessive personal data -- from the user's location to the exercises she does.

On its blog, Signal goes on to say that transparency about Facebook's techniques, apparently, is "enough to get banned."

Additionally, Signal is known to be privacy-positive. It even claims to know nothing about its users' conversations.

If the incident of ads vanishing after being critical of Facebook is familiar, it is because it has happened before.

For instance, Facebook, according to Insider, has taken down an ad that laid out Democratic Sen. Elizabeth Warren's plans to "split up" Facebook and other tech companies. But the former would later restore the said ad.

The revenue on ads is the social media giants' cash cow. But it highly relies on its user data tracking to complement its algorithm.

The tech giant, indeed, is no longer shying away from talking about how it uses personal data on ads. It had no choice as Apple, to make its users feel safer, updated its privacy policy.

Facebook now even asks iOS users to turn on ad tracking, as it affects its personalized ads. The company through a notification on its application asked for users to keep using the app for free.

Moreover, Facebook, in 2020, even before the policy update occurred, attacked Apple. In a full-page newspaper ad, the former claimed that the update will badly affect small businesses. The social media Goliath claimed to be standing up for small-scale enterprises.

Related Article: Signal Announces Difference Between its App and Other Big Tech Apps: 'Signal Knows Nothing'