Jeff Bezos and Blue Origin are holding a bid for a seat on its space tourism program, aboard the New Shepard spacecraft which would happen in July towards the atmosphere before returning to the Earth. While there is no exact destination for this flight, Blue Origin would fly five astronauts and one lucky bidder to more than 100 kilometers above sea level before re-entry to West Texas.

What is more interesting in this flight is that this would be the first outing of Blue Origin's New Shepard crew capsule, aboard its rocket booster that the company also designed. Yes, the first flight of Jeff Bezos' space company has opened a slot for an individual that has no space or flight knowledge and experience whatsoever.

This would be different from Japanese billionaire Yusaku Maezawa's plans of going to the Moon in 2023, in which he has partnered with SpaceX to provide the spacecraft complete with the booster and moon lander. Moreover, Jeff Bezos' Blue Origin has not many notable experiences, especially with the first flight of New Shepard that would only happen by July.

Blue Origin Space Tourism: One Slot for a Lucky Bidder to Board New Shepard 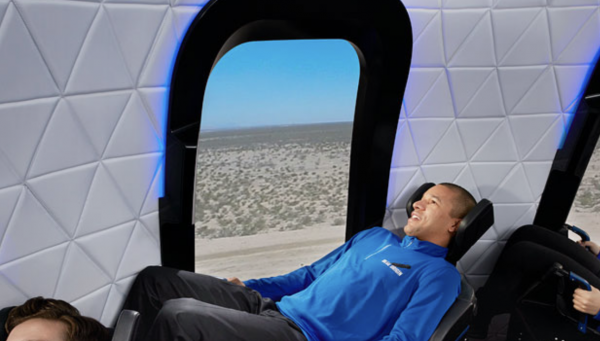 This venture from Blue Origin would be awarding the highest bidder to join Blue Origin and three astronauts in a launch that is slightly higher than the "Karman Line" or 100km above sea level. There are no notable missions or destinations for this launch, but proof that Jeff Bezos and Blue Origin are joining the space race along with SpaceX.

The bidding would be held in honor of the foundation called "Club for the Future," and according to Blue Origin's website, it is meant to be an effort to engage the youth in participating or pursuing a career in STEM and space. This club is the reason to auction for the highest bid, which in turn gives the winning bidder a seat in the four-person capsule spacecraft.

The venture would also be under the "Space Tourism" campaign of Blue Origin, which is an initiative by the company to expand people's choices and having space as a destination to see and experience. As a private space company under Amazon's Jeff Bezos, Blue Origin would feature different offers in the years to come, especially after the success of this flight.

How the Bidding Would Take Place

On July 20th, #NewShepard will fly its first astronaut crew to space. We are offering one seat on this first flight to the winning bidder of an online auction. Anyone can place an opening bid by going to https://t.co/6DpTdTxo36. #GradatimFerociter pic.twitter.com/jBMFYX7xHg

Blue Origin has laid out the timeline for the bidding that would all happen online, and it involves a sealed and unsealed auction for all interested parties for the cause.

On May 5 to 19, Blue Origin would begin to hold the "sealed bidding" event, which means that people could submit whatever amount but would not see other people's submissions

On May 19, the space company would hold an "unsealed bidding" event, which would now display the names and amount of people who have submitted their offers. The final bid would happen by June 12, and this would close the procedure and choose who has emerged winner for their chance to achieve new heights.

Blue Origin's Space Tourism aboard the New Shepard would take place on July 20.