China's Tianwen-1 Mission Prepares for Mars Touchdown on May 14: How Will it Endure the 'Seven Minutes of Terror?'

China's Tianwen-1 probe is eyeing for its "ambitious" touchdown on the red planet. The space flight was scheduled for Friday, May 14. If this attempt is successful, the East Asian country will be the third nation to land on Mars.

The challenge in this mission is how will the Zhurong rover survive the "seven minutes of terror," the entry which involves the landing of the rover. Its unforeseen consequence is deemed to be faster than the signal's speed from Mars to Earth.

The Chinese space watchers hope that the rover will endure the same experience that the Martian robots previously withstood as they entered the red-soiled planet. 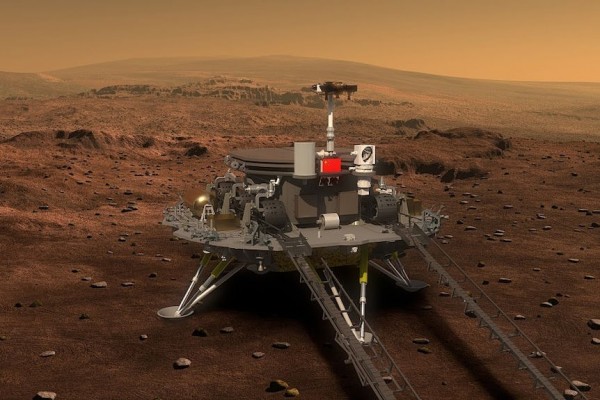 (Photo : Tom Fulop-Lover of all things SPACE Flag of Australia (@TomFulop) from Twitter)
China's Tianwen-1 mission is now gearing for its Mar's flight through its Zhurong rover. The exploration will begin on May 14, but could it withstand the seven minutes of terror that the NASA rover endured?

The Tianwen-1 probe exploration is not the first space encounter of the country on Mars. In July 2020, the ambitious mission of China has brought a rover, a lander, and an orbiter that is now revolving around the red planet.

For space agencies around the world, this is a tough challenge to accomplish since only a few trips are considered triumphant. Currently, NASA is the only space agency in the world which managed to successfully land on the surface of the red planet since 1973.

As of the moment, only the USA and Russia are the two countries known to have a victorious touchdown on Mars. If China could pass the upcoming challenge, it will be the third country on the line, Nature reported.

Read Also: China's Ambitious Tianwen-1 Mars Rover Rockets Away From Earth; Will it be Successful?

According to CNET, several reports said that the landing will kick off at around 11:11 PM UTC or 4:11 PM PT on Friday, May 14. To avoid unnecessary collision, the rover and the lander are placed inside a protective cocoon. The shell will later separate from the orbiter en route to the red planet's surface.

China has been relatively quiet about when we can expect the entry, descent, and landing to begin, but reports suggest it will occur at 4:11 p.m. PT (11:11 p.m. UTC) on May 14. The lander and rover are currently encased within a protective shell but will detach from the orbiter earlier and begin to head toward the surface.

'Seven Minutes of Terror' for China

Upon nearing the Martian land, the rover will start undergoing "seven minutes of terror" when it strikes the foreign atmosphere. In order to endure the unusual adjustments in the red planet, the rover and the lander will be encased with a heat shield after their landing.

The only time that the heat shield will wear out is when the Tianwen-1 spacecraft penetrates. In the process that it happens, a parachute will be released to slowly guide the machine on its way down.

Compared to the NASA Perseverance rover's touchdown in February, the Zhurong rover's arrival could be slightly different this time. Through NASA's sky crane method, the robot had safely descended to the surface so that it could have a "soft" touchdown in the lake bed of the red planet.

Tianwen-1 mission team will be targeting a similar land spot, Utopia Planitia where the Viking 2 lander of the international space agency stelled during the 1976 flight. During the time, the Viking 2 team has been eager to explore the planet because they believed that it could have potential life forms.

China wants to take this mission to the next level after it declared that the Zhurong rover will spend 90 Martian days (or sols) starting from its splashdown.