Google Maps is expected to release new updates that will fix one of the most annoying glitches on Android Auto. As of the moment, Android Auto fans are turning to use Google's navigation maps. 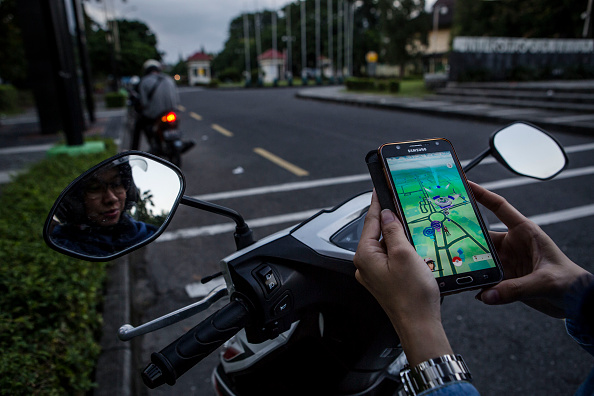 (Photo : Photo by Ulet Ifansasti/Getty Images)
A motorcyclist, Nadia, plays Pokemon Go game on her smartphone on July 24, 2016 in Yogyakarta, Indonesia. "Pokemon Go," which uses Google Maps and a smartphone has been a smash-hit in countries where it is available and already popular in Indonesia even though it has not been officially released.

However, they claimed that it is far worse since the current Google Maps no longer show the route they prefer taking.

Various Android users complained that although their Google Maps app runs properly at first, they will soon face an incorrect route display bug that makes their trip a lot more annoying. Because of this glitch on their Android Auto, people said that they are forced to rely on the audio provided by Google Maps.

Since this is a serious matter, which could lead to an accident if the users don't listen properly to Google Maps' voice instructions, the giant search engine decided to work on some updates that will fix the current issue.

According to Auto Evolution's latest report, Android Auto users no longer need to rely on audio instructions since the search engine giant will soon release some fixes to remove this bug.

(Photo : Photo by Justin Sullivan/Getty Images)
Members of the media watch a slideshow during a news conference about Google Maps on June 6, 2012 in San Francisco, California. Google announced new upgrades to Google maps including a feature to download maps and view offline, better 3D mapping and a backpack camera backpack camera device called Trekker that will allow Street View to go offroad on hiking trails and places only accessible by foot.

Also Read: Google Maps Mixes Words of Location Names Because of a New Bug: Here's How to Fix It

Nevertheless, the giant tech firm hasn't confirmed the exact release date of the upcoming Google Maps updates. Although this is the case, the Android Auto team reassured the users that they were able to find the main reason behind the route glitch.

On the other hand, the developers also suggested that Android Auto fans should install the latest version of Google Maps if they are still encountering the routing bug.

"Thanks for all your feedback reports. The Geo team has addressed this issue.," said an anonymous Google Community Specialist. "We recommend updating the Google Maps app and Android Auto app to the latest version and let us know if the issue still persists."

Aside from route glitch fix, Google also announced that it will soon release Google Maps' new Driving Mode. However, some rumors claimed that the giant tech company is slowing down the feature's international rollout again.

This means that only a few selected users will have the chance to have Driving Mode's "Early Access" version.

On the other hand, Next Pit reported that Google confirmed that the new feature is only available in one language, which is English.