The Twitter account of the scientist who told Dr. Anthony Fauci in an email that COIVD "looks engineered" has disappeared from the platform. 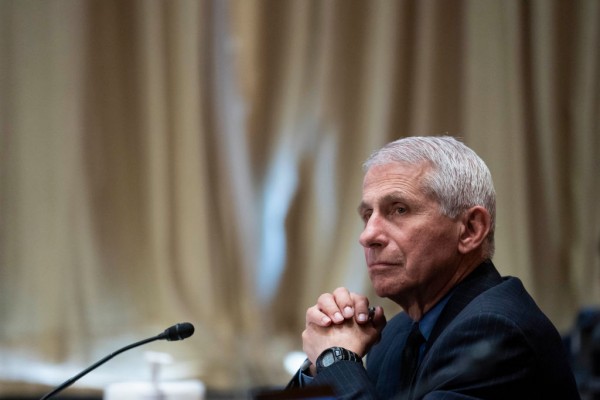 (Photo : by Sarah Silbiger-Pool/Getty Images)
WASHINGTON, DC - MAY 26: Dr. Anthony Fauci, director of the National Institute of Allergy and Infectious Diseases, listens during a Senate Appropriations Labor, Health and Human Services Subcommittee hearing looking into the budget estimates for National Institute of Health (NIH) and state of medical research on Capitol Hill, May 26, 2021 in Washington, DC.

Before the account of Kristian Andersen, a Virologist of Scripps Research Institute, completely vanished, his email thread with Fauci leaked on Twitter.

As per Newsweek, his account started to be inaccessible on June 6.

The exchanges between Andersen and Fauci started way back in January 2020 talked about the possibility that COVID-19 is potentially engineered.

The Washington Post first reported about the exchanges. Andersen wrote in his email: "I should mention that after discussions earlier today, Eddie, Bob, Mike, and myself all find the genome inconsistent with expectations from evolutionary theory."

But later, on March 17, 2020, Andersen, alongside a couple of other scientists, concluded that the COVID-19 virus was not "purposefully manipulated."

Furthermore, the virologist has been the talk of the town for his changing views, which suggests a possible cover-up.

According to Newsweek, after the account of Andersen was removed, he appeared on Sky News and claimed that Fauci is part of a cover-up.

"I know it's super mundane, but it isn't actually a 'massive cover-up.'" Andersen told Sharri Markson of Sky News.

According to Fox News, Andersen has not responded to the media company. So, it was unclear if he deleted his Twitter account.

However, a Twitter spokesperson cleared out that "the account was deactivated by the user. No action was taken on Twitter's part."

The emails of Andersen and Fauci have come into the spotlight as President Joe Biden asked the United States intelligence agencies to ramp up their investigation for the COVID-19 origins.

Fauci also said that he is no longer convinced of the findings that the virus is a result of animal to human transmission. It further heightened what Dr. Li-Meng Yan, and even the former President Donald Trump believed -- that COVID-19 has engineered origins.

On June 3, Li-Meng Yan also voiced out that she had emailed Fauci last year that COVID-19 is not merely a natural occurrence; it is instead being used as a bioweapon. Additionally, she accused Fauci about being involved in a cover-up, which ended up not requiring Americans to use their mask as early as it was necessary.