Samsung Galaxy Watch 4 and Watch Active 4 FCC certification revealed some technical details even before their actual launch sometime in August. The filing leaked the connectivity connections, batteries, and wireless chargers of the upcoming device. 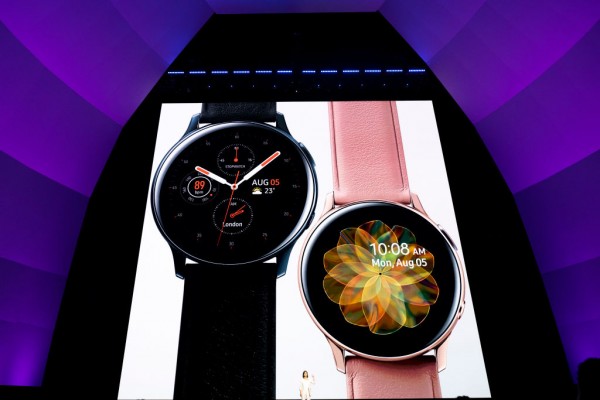 (Photo : by Drew Angerer/Getty Images)
NEW YORK, NY - AUGUST 7: The new Samsung Galaxy Watch Active 2 is displayed during a launch event at Barclays Center on August 7, 2019 in the Brooklyn borough of New York City. Samsung announced the Galaxy Note 10 and Galaxy Note 10 Plus smartphones, which go on sale August 23 starting at $949.

However, the actual date remains confusingly unknown, but leaks agree on what month it is likely to unveil. As of writing, the rumored dates are August 3, 6, 13, or 27 — no one knows for sure.

SamMobile has seen the FCC certification that the South Korean giant filed for its upcoming smartwatches.

The filing confirmed the report that the Watch 4 and its Active variant will be charged wirelessly. The earlier information from a separate filing on China also noted that the power adapter will be a thing of the past.

Additionally, a 247mAh battery powers the smartwatches, according to the previous filing. The FCC certification, on the other hand, does not mention the battery capacities.

Due to wireless charging, the smartwatch will be powered by China's Amperex Technology Limited, according to a separate report by SamMobile.

The documents also stated that there are two versions of the Galaxy Watch 4: a Wi-Fi only with model number SM-R880, and SMR885 with LTE connectivity.

Meanwhile, the Watch Active 4 is also getting similar variants with model numbers SM-R870 for WiFi, and SM-R875 for LTE.

Model numbers aside, it only means that the 4 series is still getting the options that its predecessors had. Additionally, Apple Watch also introduced its LTE variant in 2017.

On top of the WiFi and LTE connectivity, all four of them are getting Bluetooth 5.0 and NFC.

The collaboration of Google and Samsung has forced the Galaxy Watch 4 Series to bid farewell to the Tizen OS of the South Korean giant. Wear OS will power the wrist devices instead.

The major merger competes with Apple as it remains atop the smartwatch market since it launched in April 2015, as per Wired. To add, the older installations of the Galaxy Watch will still receive three years of support from Tizen. Until then, users will have to switch to the latest wearable offering.

A similar rumored feature for Apple Watch Series 7 is likely to come to the South Korean smartwatch: blood sugar or glucose monitoring.

It could also feature an added support for Samsung Pay, alongside an IP68 rating.