Zens Magnetic Dual Powerbank is not your ordinary battery storage since it could charge up to your iPhone and AirPods at the same time. This portable feature would spice up what your chargers could do.

Since Apple's MagSafe charging came to the market along with several iPhone accessories, the capability to wirelessly charge your gadgets has been a game-changing feature for the fans.

Zen's Double-Sided Battery Could Do a Charging Trick 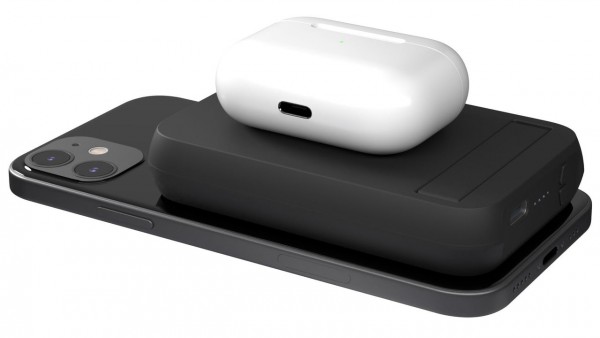 According to Gizmodo's recent report on Wednesday, June 16, the MagSafe charging which was initiated by the Cupertino giant, has been reliant on its portable chargers placed at its rear. While iPhone users already have an idea about this accessory, several power banks have only limited abilities to charge a select number of devices.

Through Zen's wireless charging coils attached to the side of the battery, charging your two Apple devices at the same time would be an easy feat to accomplish.

As far as we know about Anker, which is also known for its portable charger, Zen's creation in the form of Magnetic Dual Powerbank would do different magic than you could expect. The former, despite its unique settings, could only make your device heavier through its conspicuous presence in your iPhone's back.

The downside, however, in Zen Powerbank is its less charging capacity compared to the PowerCore Magnetic Powerbank of Anker. What lacks its charging feature makes up for an additional room for another device.

The Magnetic Dual accessory has only 4,000 mAh power compared to Anker's 5,000 mAh--a difference of 1,000. It's noteworthy to remember that what Zens did here was an impressive Qi wireless charging coil that was present on each side.

Read Also: Apple MagSafe vs USB-C MacBook Pro Chargers: What Are the Cons of Magnets?

The two sides offer different services. One side supports Apple's MagSafe charging. The other side on top works if you want to aim for the non-MagSafe feature. The latter includes a "pop-out kickstand" so you could erect your iPhone even though the power bank is in various positions such as landscape and portrait.

Charging both your smartphone and another gadget simultaneously could appear to be an outstanding feature for techies. However, be mindful that there are disadvantages to this capability.

To incorporate your iPhone into the Zens Magnetic Dual Powerbank could require a specific "face down" position" so you could enable charging another gadget on the Qi pad. This pad is sold separately at $110. Somehow, this is the trade-off that you could experience for this MagSafe-supported accessory.

On Tuesday, June 15, Apple Insider reported that Twelve South has launched its leather wallet case, SurfacePad which is compatible with the MagSafe feature.

Currently, the company has been developing many accessories for Apple products. The latest creation provides adhesive support for your iPhone.