Call of Duty: Warzone Has a Door That Instantly Kills Players

"Call of Duty: Warzone" is a game where players are out to kill one another in order to be the last one standing and win. One player, however, recently found himself killed in the game not by a fellow player, but by a seemingly harmless door.

The player who discovered the glitch has posted a video of his experience on Reddit. Going by the username Rxelik_, the CoD enthusiast was in the salt mining facility location of "Call of Duty: Warzone" when he found a seemingly regular barricaded door.

Rxelik_ made an attempt to open the door, only to die in the game the moment he touched it. The same thing happened when he respawned in the game and made a second attempt at opening the same door.

Call of Duty: Warzone Has Other Glitches

"Call of Duty: Warzone" has had its fair share of glitches that have either frustrated or entertained its players ever since its launch.

Players have complained over time over a number of glitches they've encountered on the game, including one that locks a player's camera to third-person point of view and another that allows players to go invisible, making it difficult to find players to kill and win the game.

According to PC Gamer, players have also encountered stranger glitches while playing "Call of Duty: Warfare," such as a glitch that made an attack helicopter invisible and one that gives players that ability to worm under the map. For the latter, players can stay hidden under the ground while still being able to shoot other players through the floor.

Related Article: 'CoD Warzone' Stim Glitch is Back! YouTuber Exposes New Way How to Use

Redditors React to the Murdering Door

The latest "Call of Duty: Warfare" glitch, however, has generated numerous laughs and funny comments on Reddit.

Reddit user CptNoSense commented how the player "sacrificed himself for science" by touching and being instantly killed by the door. Another Redditor quipped that the player was, quite literally, on death's door.

Other users seemed more puzzled than entertained, however, with one user asking, "Wasn't that an open door before the update?" 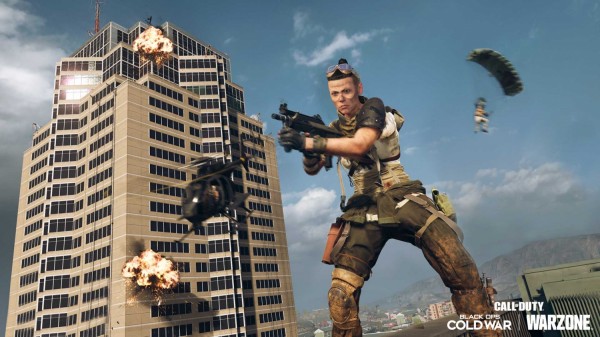 "Call of Duty: Warzone" allows online multiplayer combat that can accommodate 150 players with some modes allowing up to 200 participants. In the Battle Royal mode, a player's goal is to be the last player standing and must kill other players to achieve the goal, while also having to deal with a shrinking game map.

According to its publisher, "Call of Duty: Warzone" has surpassed 400 million premium game sales and reached 100 million active players worldwide.

‘CoD Warzone’ Stim Glitch is Back! YouTuber Exposes New Way How to Use

'Call of Duty Warzone' Invisible Loadout Glitch Tutorial and Activation: How to Do and Defeat It—Guide