A wind-powered innovation of Asbørn Nes is believed to be taller than France's famous spot, Eiffel Tower. The "Windcatcher" as its name suggests, is a technology that could harness winds and use them as renewable energy. 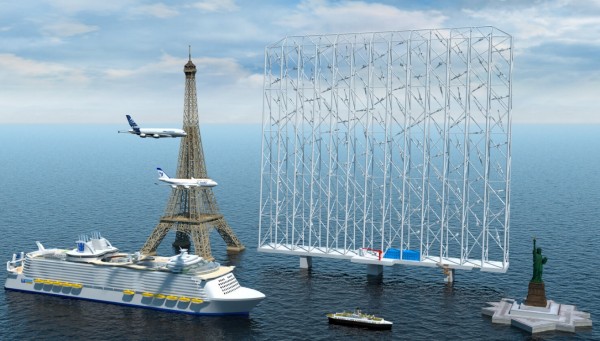 (Photo : Wind Catching )
The size of Windcatcher compared to the global trademarks such as Eiffel Tower and Statue of Liberty.

According to the Wind Catching website, the design of the Windcatcher fits its ideal look for the wind power industry. It is said to be the "Horizontal Axis Wind Turbine."

Its look might be an ordinary layout for those who first see it, but for the developers, it is compared to the "space-age" windmill which features a tall pole holding huge rotating blades.

From the picture, this old design is suited for its parts since the entrepreneurs, Ole Heggheim and Arthur Kordt think that it would function to give sufficient power for the 21st century.

Wind Catching Systems AS CFO Ronny Karlsen said that his team is pushing to be more creative in the Windcatcher's design. He pointed out that innovation involves changing something that is already existing.

Previously, wind power technology was used in some conventional wind farms. This time, Windcatcher would be placed to suit an offshore setup. The company is now starting to replicate the unit and spread it across the oceans.

Karlsen continued that the technology for floating structures offshore is becoming popular among the gas and oil industries. He further explained the presence of floating oil rigs that are stationary to the sea bed.

Furthermore, Karlsen added that the Windcatcher has turbines in its system. He shared that the part where the innovation is tackled is when all of the parts have matched each other--which is more unique compared to what people usually see in the market.

What Problems Could the Existing Wind Farms Face?

According to IFL Science's report, renewable sources of energy are everywhere on the planet. The problem here is the presence of fossil fuels which result in severe environmental impacts.

In some cases, hydroelectric energy coming from dams poses harm to wildlife. Geothermal energy is costly to maintain, whereas solar energy's efficiency decreases during the rainy season.

Wind energy also has some problems. In 2019, it comprises over 5% of all energies globally. It is expected that as we move to the next year, the usage of wind power would increase. This would pave the way for a renewable energy source to propagate in numbers.

According to Karlsen, they saw that wind farms are experiencing maintenance issues specifically when it comes to their cost. That's 25-30% of the total lifecycle cost of a typical wind farm.

On the other hand, the Windcatcher relies on its vessels to generate turbine movement. Karlsen said that they are using the "elevator system" for this Eiffel Tower-sized technology. Besides reductions in operating costs, the repair and maintenance for this creation are much easier.

What Capabilities Could Windcatcher Do?

The developers of Windcatcher would continue to explore the maximum potential output that it could yield. As a standard wind turbine operates, electricity production begins at a wind speed of 12 meters per second.

The Windcatcher, on the other hand, can reach up to 17 or 18 meters per second thanks to the highly-developed but small rotors. These bring the multirotor effect which is borne from several rotors. Later, the production of wind power accelerates.