A Tesla Model S Plaid owner claimed that its airbag fell off his hands before he even left the parking lot of the dealership. 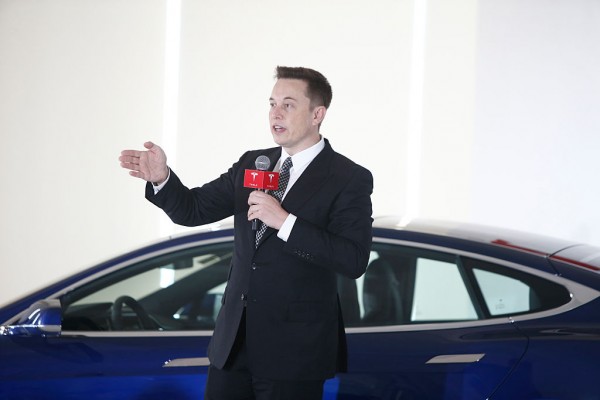 (Photo : by VCG/VCG via Getty Images)
BEIJING, CHINA - OCTOBER 23: (CHINA OUT) Elon Musk, Chairman, CEO and Product Architect of Tesla Motors, addresses a press conference to declare that the Tesla Motors releases v7.0 System in China on a limited basis for its Model S, which will enable self-driving features such as Autosteer for a select group of beta testers on October 23, 2015 in Beijing, China. The v7.0 system includes Autosteer, a new Autopilot feature.

Ricco Kimbrough, a TikToker fond of featuring cars, uploaded a clip narrating his outrage with the latest Tesla vehicle that he recently got his hands on. Currently, he posts videos documenting his disappointment with his new purchase.

According to Daily Mail, the public school teacher paid a total of $89,190 for the Tesla Model S Plaid with an alleged broken airbag.

The series of videos of Kimbrough began showing the new Tesla owner enjoying the cabin of the latest vehicle as he played rap tunes in the background. He then went on to boast the touch-screen infotainment system of Elon Musk's EV company.

However, the new owner started to be disgruntled by the fifth installation of his video series on TikTok. The camera panned to the Yoke steering wheel of the vehicle — not to show it off but to film the airbag dangling off it.

He dubbed the airbag issue as a "cheap baloney" and said that the flaw is unacceptable.

Further videos showed Kimbrough clouded by frustration as he discovered that the airbag is not connected to the steering wheel as well, merely sitting on top of it.

As he grew irritated, he even said that Tesla "is not the safest car," contrary to the company's claims.

Unilad reported that Tesla claimed on its website that their cars are "engineered to be the safest in the world."

Elon Musk's company further said that its drivers, passengers, and other drivers of other brands are kept away from harm due to its standard of safety. Meanwhile, the Tesla CEO flaunted during its launch that the newest vehicle is faster than falling.

Tesla has yet to respond to the unfortunate experience of the new Model S Plaid owner.

Read Also: Tesla Supercharger Network To Allow Other Automakers By 2022 But Costs Will Be Shared?

Kimbrough concluded the series of clips by likening the quality of Tesla's builds to LEGOs. As such, he advised other buyers to check their purchases before leaving the dealership.

Elsewhere, if you're planning to get a Tesla Model S Plaid, here are some hidden features you should know about.