'Call of Duty' Series' Next Instalment LEAKED on Battle.net?

"Call of Duty" seems to be doing just fine judging by its current free-to-play multiplayer offering, but a recent leak suggests it's not done with mainline CoD titles yet. 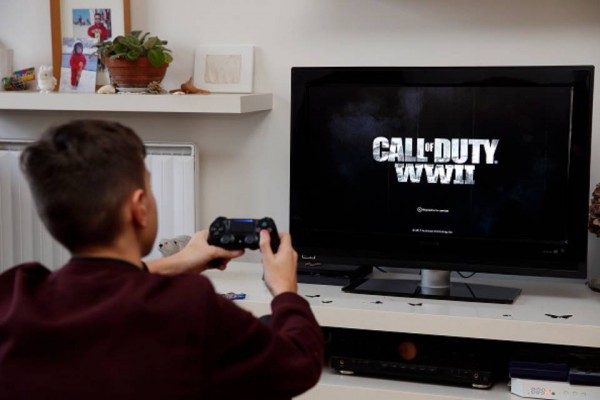 (Photo : Chesnot/Getty Images)
PARIS, FRANCE - DECEMBER 19: In this photo illustration a gamer plays the video game 'Call of Duty: WWII' developed by Sledgehammer and published by Activision on a Sony PlayStation game console PS4 Pro on December 19, 2018 in Paris, France. Call of Duty: WWII is a multiplayer video game about the Second World War.

According to a report by ComicBook.com, the next title in the long-running "Call of Duty" franchise has been leaked on a relatively official channel: Activision Blizzard's Battle.net client. The name of the alleged game is "Call of Duty: Slipstream," and it already has a logo if the leak is accurate.

Sledgehammer Games also looks to be the developer for the next big CoD game, which people think will be taking players to a sci-fi-infused, alternate history version of World War 2. If so, then the setting could look a lot like the "Wolfenstein" games. If you haven't checked your Battle.net account yet, then maybe it's still there if you're mighty curious.

The new name follows what sites like GameRant used to report as "Call of Duty: Vanguard" earlier. According to insiders, the game is rumored to be set in the Pacific Theater of WW2, but would feature a twist that could be welcome news to the ears of burnt-out FPS gamers.

Leaker Tom Henderson (the same guy who shared more-or-less accurate details about "Battlefield 2042") was again among the first to break out the news on his Twitter feed:

Call of Duty 2021 has updated on https://t.co/hsFaJ0phsm as "Call of Duty: Slipstream" with the attached logo. Looks very WW2 to me. pic.twitter.com/O35cusy2lW

It would be best, however, for fans to assume that the name of the next "Call of Duty" game will change without prior notice as development goes on. Activision Blizzard also hasn't spoken about it yet, so it's safe to say that the leak is inaccurate for now.

'Call of Duty': The Game Franchise that Refuses To Die

The "Call of Duty'' franchise has been on the end of countless memes and jokes for its longevity. And you can bet that Activision Blizzard knows that. But then again, how can they kill the franchise when it's one of their biggest money-makers?

Earlier this year, Activision Blizzard revealed that the CoD games still constitute the bulk of their yearly revenues and stock price. In May, the game developer and publisher reported a 26% increase in revenue at $2.28 billion, which is not too shabby for a game series that's been going on for almost two decades.

What's even more amazing is that they're making that much money even from games that are totally free to play. Case in point, "Call of Duty: Warzone." Built to take advantage of the market's current affinity for battle royale shooters, "Warzone" is now one of the most played (and streamed) games online.

As of April, the game has already surpassed 100 million players, according to the official website. That's a total of 28.8 billion matches played all over the world, while also selling 400 million "Call of Duty" premium games on the side. For Activision Blizzard, the CoD franchise defines a "cash cow," and they can't be blamed for it.

So, with this leak, it could be safe to say that people will still gobble the game up no matter what is said about the series as a whole.