Twitter's "Reply to Tweet" settings or "change who can reply" upgraded its features as it can now be tweaked even after publishing the said tweet. It is a powerful tool compared to before's feature, as it can limit the conversation to people that one only follows or those who have been tagged, turning it off for the haters or trolls on social media. 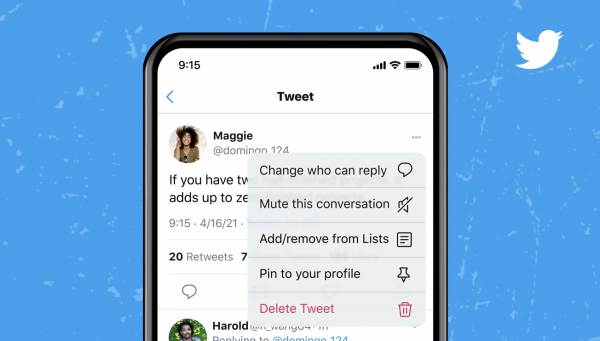 There have been a lot of controversies on Twitter which social media users want to be changed, and it involves a lot about privacy on the platform for users to feel safe and secure.

In the recent statement by Twitter Safety (@TwitterSafety), users can now change those who can and cannot reply to a certain tweet or conversation, even after publishing one's tweet. This is part of Twitter's campaign for online safety and feeling secure despite using one's platform on social media, applicable for everyone that uses the platform.

The social media company said "Your Tweets = your space," and this signifies the recent update they made that aims to strengthen the control of a user on their social media profile.

The option can be found on the three-dot drop-down menu which appears on the specific tweet that the user wants to tweak or restrict from others.

Your Tweets = Your space. Now you can change who can reply to you even after you Tweet. https://t.co/rNWJk6zWTr pic.twitter.com/3HFSjAotg7

Potentially, this can help in keeping away those who are not part of the conversation or will only bring nothing important to the thread that the author is trying to spread. Moreover, it can help in keeping out trolls and spam accounts from cluttering and sending unnecessary information on one's thread.

Also, it can only be intended for those tagged or mentioned in the tweet, and even others which the user follows would be restricted from "butting in."

'Reply to Tweet' May Not be For Everyone Anymore

Previously, the settings can only be changed before a tweet is published. This means that after publishing the tweet, users can no longer have control over those who reply if their setting is open for everyone.

This new conversation experience is here for everyone! When composing a Tweet, tap “🌎 Everyone can reply” to change who can reply.

We’re just getting started with features to help you feel safer Tweeting and have more meaningful conversations. Details: https://t.co/gWspbKs5SG pic.twitter.com/K0VLQ09ikP

With the new feature, the author can now block out anyone they feel is being disrespectful or have no contribution to the conversation, especially when a commotion has already taken place in the discussion. On the other hand, this may potentially keep a thread clean and open for those who are considered to be colleagues, friends, or acquaintances which one follows.

Will the New Feature Help in Protecting One's Online Persona?

The new feature from Twitter will not only help the person protect one's online persona but also help in keeping a thread clean and only open to people that one follows or mentions in the conversation.

This could be particularly helpful in threads that talk about massive topics like health problems amidst the COVID-19 pandemic, discussing new studies, and the like.