China’s Zhurong Mars Rover Travels Over 500 Meters on the Red Planet Unharmed—What’s Next?

China's Zhurong Mars Rover has already traveled more than 500 meters on the surface of the Red Planet, which is still in good condition as of 11:00 P.M. on July 18, Saturday (Beijing Time), the China National Space Administration boasted. 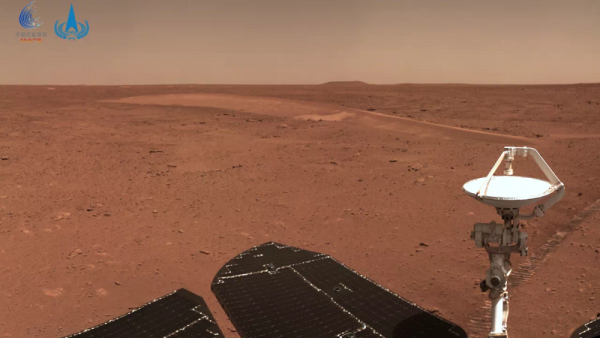 (Photo : China National Space Administration)
China’s Zhrurong Mars Rover successfully travelled 508 meters on the surface of the red planet without being harmed. Here’s what the spacecraft plans to do next.

The Chinese Mars rover, whose moniker was borrowed from a name that a legendary god of war and fire in the Asian country carries, landed on the Utopia Planitia of Mars via the Tianwen-1 Spacecraft of China on May 15.

Its touchdown came after it has been flying in space for about seven months.

The said landing is a monumental achievement for the Asian country as it heralded them as the third country to have ever successfully brought a rover to Mars.

Furthermore, Zhurong is meant to study both the surface and atmosphere of the Red Planet. Plus, the machine will also search for any signs of living creatures and water.

After a few weeks from its historical landing, on May 22, the remote-controlled Chinese rover began its voyage on the rocky surface of Mars, wherein it drove away from its landing platform, as per BBC.

State-owned China Global Television Network reported that the Zhurong rover has been staying on Mars for a total of 63 Martian days, also known as "sols," already.

It is to note that a complete 24 hours on the Red Planet is 40 minutes longer when compared to the time on Earth.

Additionally, the Deputy Chief Commander of the Mars Mission named Zhang Yuhua previously noted that China's Zhurong was created to last for up to 90 Martian days, which is equivalent to 92 days on Earth.

The Chinese-controlled outlet further revealed that the rover has already traveled a total of 509 meters on Mars as it further studies its surface, adding that both the rover and the orbiter remain in a good condition. Not to mention that each of its subsystems still operates normally-albeit its continued navigation of Mars.

Zhurong sent an image to Earth before recording more than 500 meters of travel, flaunting its parachute and protective shell while it was on the surface of the Red Planet.

The media was sent by the Chinese rover via the Tianwen-1 orbiters, which served as the communication satellite of Zhurong to Earth. To add, it has been in orbit longer than the monumental landing on Mars, 356 days to be precise.

Meanwhile, some scientists warned that the colossal hole that the Mars rover dug into the surface of the Red Planet upon its landing could pose a bigger threat.

The Chinese rover has already surpassed the 500-meter mark of the voyage in the Red Planet, which indicated that it is nearing its second sand dune, wherein Zhurong will be surveying in a more detailed manner.