"Battlefield 2042" is getting a new feature that lets players enjoy a customizable creative mode in the game.

Electronic Arts (EA) has announced "Battlefield Portal," a feature that lets players use maps, weapons, and even vehicles from previous games in the franchise in creating their own battles.

According to The Verge, maps, weapons, and vehicles that players can use will come from titles such as "Battlefield: Bad Company 2," "Battlefield 3," and "Battlefield 1942."

"Battlefield 2042's" newly announced feature is "a love letter to fans and creators," according to a statement from Ripple Effects Studios Senior Design Director Justin Wiebe included in a briefing for "Battlefield Portal" posted on the Electronic Arts' website.

The Electronic Arts briefing describes "Battlefield Portal" as a "community-driven platform within 'Battle 2042' that will let you create and find fantastic experiences made by the series' creative and passionate community."

It will include what EA calls the Settings, which players can use to build unique experiences in the game. These settings can affect factions, mobility, and visibility.

Fans also get to create their own version of what EA refers to as Experiences. Players can join each others' created Experiences which "can run custom games or preset modes, such as Conquest, Team Deathmatch, Rush, and other fan-favorites available at launch."

"If you end up liking another player's Experience, you can Follow that player to keep track of when they're running matches," according to EA.

According to The Verge, developers have said that any new content that will be added in "2042" will also be added in "Portal."

Related Article: 'Battlefield 2042': Pay $100 for Gold Edition and Get the PS4 to PS5 Upgrade-Here's is its First Trailer

Maps, Weaponry, and Other Content From Previous 'Battlefield' Titles 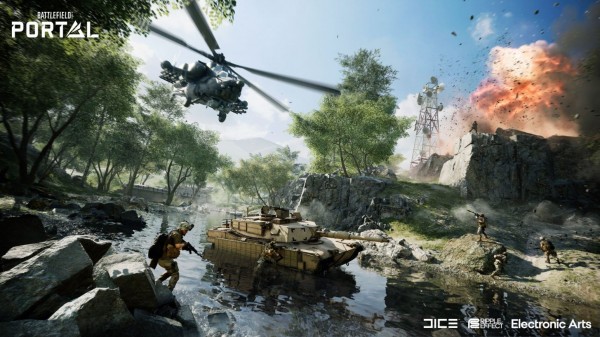 "Battlefield Portal" will feature content seen in previous "Battlefield" games. These include weapons, maps, vehicles, factions, and classes all reimagined using the visuals of "Battlefield 2042."

As for weapons, semi-automatic raffle M1 Garand and assault rifle M416 will be included in "Battlefield Portal." Players can also expect to see returning vehicles such as the Spitfire and B17 Bomber.

"Battlefield 2042" is a first-person shooter game scheduled for release on October 22, 2021, for platforms such as PlayStation 4, PlayStation 5, Xbox One, Xbox Series X/S, and Microsoft Windows.

It is the 17th installment of the "Battlefield" franchise, which is developed by DICE and published by Electronic Arts. EA announced last April that a "Battlefield" mobile game is in the works.

"Battlefield Portal" will be launched at the same time as the game's release in October.

'Battlefield 2042' Screenshots 'Accidentally' Leaked Out by Electronic Arts; Should You Be Excited?