RTE, Nidec Team Up for 'Ringo," the First Attempt for Automated Management of a Battery System

RTE and NIS, the latter being a part of the Nidec Group's Energy & Infrastructure Division, has inaugurated "Ringo," its collaborative experiment. Situated in Vingeanne - Jalancourt, in the Côte-d'Or department, this will be the site for the attempted automated management of large-scale electricity storage. A little over a year after the announcement, Ringo is expected to test the automatic management of surplus renewable electricity, leading the way to transform the electricity system - one from polluting sources to those that are sustainable and renewable. 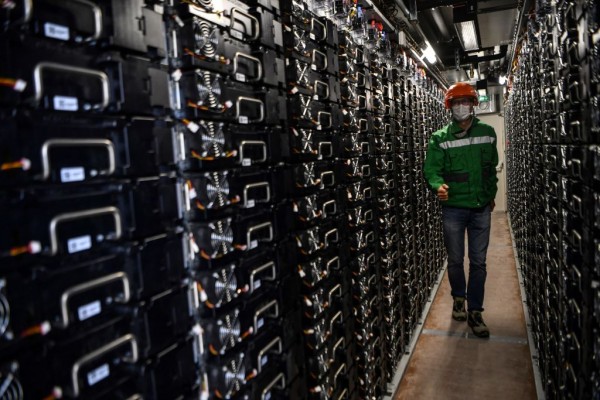 (Photo : Photo by PHILIPPE DESMAZES/AFP via Getty Images)
A worker controlS batteries in an electricity storage container on September 29, 2020 in Fontenelle near Dijon part of "Ringo", an energy storage project. - The project is to build a storage system to optimize management of energy flows on the transmission grid in France.

The Role of Nidec Industrial Solutions in Setting Up Ringo

Nidec Industrial Solutions was the chosen partner by the French transmission system operator to install the country's first electrical energy storage system, which is used to optimize the management of power flow on the RTE transmission grid. With "Ringo," it would be possible to manage the grid better and avoid congestion when it faces peak demand. Stressing the importance of battery storage systems for modern power grids will help realize a sustainable electric system for the future.

Energy production from renewable sources like solar or wind energy can greatly increase depending on weather conditions, which could potentially exceed the transport capacity of the national power grid. This results in the dispersion of the surplus energy produced. With the Ringo system in place, the surplus energy could be stored during production peaks and returning them back to the energy grid when needed. Consequently, this means that the transmission system operator no longer has to build no electric lines. Also, it could lead to reduced electricity losses produced from renewable sources, and with it, reduces the system's carbon footprint and eliminates the need for polluting energy sources.

Nidec and RTE's "Ringo" is also projected as a smart system - the first of its kind in the world. Its storage battery site will be controlled remotely through robots that gather data in real-time, marking it as the first automatic control system on a national energy grid. Additionally, sensors are installed across the grid, constantly measuring electrical flows, feeding into algorithms that adjust and optimize energy storage in real-time.

The Ringo site on the Vingeanne - Jalancourt site, NIS will provide its power electronics converters, and its Power Management Systems, which allows the conversion of stored energy back into electricity, supplying the energy grid provides power to consumers. Batteries in the project - which stores surplus electrical energy - are NMC (Nickel, Manganese, Cobalt) high energy density Lithium-ion type.

"The experiment we have launched today with RTE is a fundamental step towards achieving a zero-emissions society by 2050, a goal Europe is committed to reaching. To achieve this, more electricity will have to be produced which is why it will be necessary to improve energy management by modulating production and consumption," says Dominique Llonch, NIS Chairman and CEO of Nidec ASI.

'Tesla Virtual Power Plant' Now in Beta, Owners Can Sign-Up But Won't Get Any Compensation