Also Read: 'Fortnite' Brings Loki on July Crew Pack; How to Get, Price, and Everything You Need to Know

The two companies confirmed that the new "Marvel Future Revolution" will arrive on iOS and Android devices this coming Aug. 25.

On the other hand, the game developer, which also published various popular titles like "The Seven Deadly Sins: Grand Cross," "Blade and Soul Revolution," and more, confirmed the pre-registration for its upcoming action RPG game is now available worldwide.

The moment that you've all been waiting for: MARVEL Future Revolution launches on 8/25! The call for Super Heroes to unite is NOW. Pre-Register Here: https://t.co/tQNRrPqJ1X pic.twitter.com/UF5IpmZaQh

"MARVEL Future Revolution begins when numerous Earths from across the Multiverse converge to form an entirely new 'Primary Earth' filled with many missions across unique zones: the high-tech New Stark City, the dangerous Hydra Empire, the wild and rugged Sakaar, and many more," said Marvel Entertainment via its official press release.

"As agents of the newly formed 'Omega Flight' Super Hero team, players will work together to battle an onslaught of Super Villains and defend the 'Primary Earth' from a never-ending series of threats," added the film studio.

According to Marvel Entertainment, there will be eight playable superheroes. These include the following characters: 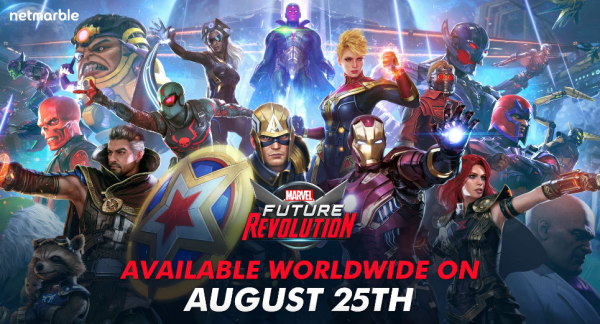 MARVEL Live returns for another fantastic slate of announcements and reveals! Join @AgentM and @zingodude on 7/27 5:00PM PDT for an evolving look behind the scenes at #MARVELFutureRevolution! pic.twitter.com/6q3SIIdyYA

On the other hand, Netmarble Corp. announced that the mentioned characters would have their iconic outfits. But, they could also have new cosmetics as the game goes on. The game developer confirmed that the Marvel Universe would have around 400 million costume combinations for every champion.

The new "Marvel Future Universe" is a game developed through the second collaboration of Marvel Entertainment and Netmarble since these two companies already created another popular mobile game titled "Marvel Future Flight."

This title is currently being played by around 120 million gamers across different countries.

Other Details of the New Marvel Game

While doing this, you will also find the game developer's official accounts for its new "Marvel Future Revolution" title. Aside from this, you can also click this link to pre-register the new game on your mobile device.

Once you access the official web page, you will be directed to the pre-registration section. You will also notice that it is currently offered in Apple App Store and Google Play Store.

Meanwhile, suppose you want to pre-register the game on your laptop or computer. In that case, you can choose the "Email Pre-Registration" option since the game publisher explained that pre-registration on App Store is exclusive for iPhone users.

For more news updates about "Marvel Future Revolution" and other movie-based titles, always keep your tabs open here at TechTimes.