"Rocket League" is paying tribute to a legendary movie icon with its new big-brand collaboration.

After striking a multiple-year deal with MGM, "Rocket League" creator, Psyonix has brought the legendary Aston Martin DB5, aka James Bond's car, into their game until July 4, writes GiveMeSport.com.

The collaboration will be coming out alongside the release of the newest Bond film, titled "No Time To Die," which will once again star Daniel Craig. Set to release this September, the 25th Bond movie to star Craig will also be featuring a slew of Aston Martin cars that have made an appearance throughout the franchise's 58-year history.

Here is a cinematic trailer, if you're curious:

Right now, the car is already available in the "Rocket League" in-game shop for $10 (1100 credits), which costs a bit much for a cosmetic upgrade that doesn't give any in-game performance benefits. But considering how legendary and recognizable the car is in popular media, maybe Psyonix could get off scot-free on this one.

Aside from the car itself, buying the $10 package will also give players the 007 Aston Martin DB5 Paint Finish (aka the signature silver color), the DB5's wheels, engine audio, and a Reel Life decal, writes The Verge.

If you think this is the first time ever that Psyonix is collaborating with an iconic car from a famous movie franchise, you're wrong. They've done it before.

Around four years ago, the game launched a DLC featuring the "Fate of the Furious," which is the 8th instalment of the long-running "The Fast and the Furious" franchise. Back then, it was also some sort of promotional deal as the film released the same year.

But perhaps their biggest-profile deal was the one they struck during Back to the Future Day, October 21, 2015. It was then when they announced the addition of the iconic DeLorean time machine car, to celebrate the actual day and year that Marty McFly and Doc Brown time-traveled to in the second "Back to the Future" film.

Aston Martin DB5: One of the Most Legendary Cars In History

The DB5 wasn't the fastest, most powerful car of its time. It's not even the first car that super-spy James Bond ever rode on screen. But nobody can deny its star power. 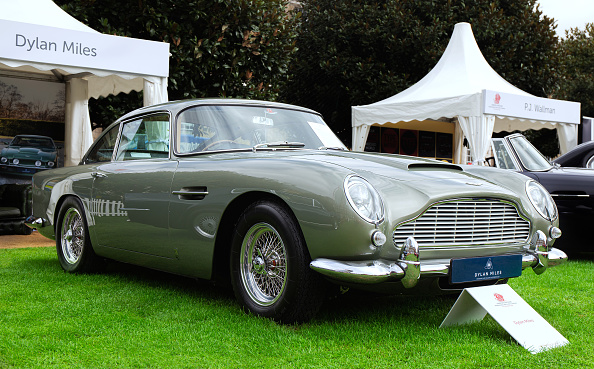 (Photo : Martyn Lucy/Getty Images)
DON, UNITED KINDOM - AUGUST 19: The Aston Martin DB5 seen at London Concours. Each year some of the rarest cars are displayed at the Honourable Artillery Company grounds in London.

It first appeared during "Goldfinger" in 1964, then appeared in six more Bond films until 2021's "No Time To Die." This means that it went through three different major Bond actors: Pierce Brosnan, Daniel Craig, and the legendary Sean Connery. Over the course of its movie career, the Aston Martin DB5 gained its iconic status as the car of choice for the world's foremost super-spy, and it's held onto its classy mystique until today.

With the car appearing in "Rocket League," it's going where it's never gone before in pop culture: flying around the digital pitch, and "kicking" a giant football into a goal.

Now, you can score a goal in style.

Related: FaZe Clan Enters 'Rocket League' with 'The Peeps'-Is This the Dream Team? Get to Know the Players

FaZe Clan Enters 'Rocket League' with 'The Peeps'—Is This the Dream Team? Get to Know the Players

'Rocket League' Mobile Could Launch for Android, iOS This 2021!