WhatsApp 'View Once' is a Disappearing Photo Feature, Something Which Instagram Had for a Long Time

WhatsApp has debuted its "View Once" feature, which resembles that of a disappearing photo feature on several messaging applications, bordering on encrypted messaging. This is a feature that most instant messaging applications already have, even WhatsApp's sister company, Instagram, for its direct messages feature.

The Facebook-owned social messaging application has been launching a lot of features in the past months, something that is already available from other apps. One example is a video chatting tool that resembles the iOS' FaceTime. 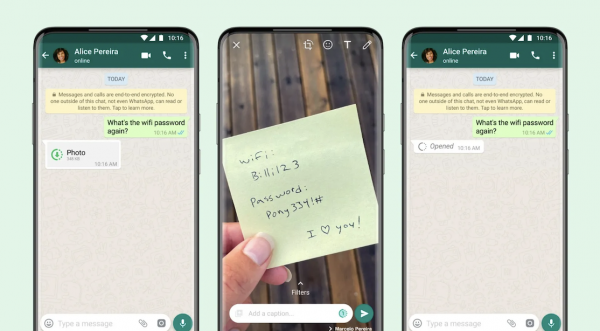 According to WhatsApp's latest blog post, the company has added in a slur of new features for its services and one of them is a privacy-centered messaging tool called "View Once." Yes, this is something already found on other service providers and instant messaging apps, but is only available via its encrypted chat feature or "Secret Chats."

And while Secret Chats was popular when it first launched, it brought a different kind of experience and protection that leaves no trace of any conversation, messages, or media once the user deletes it.

However, WhatsApp's "View Once" feature would be different, especially as it can be accessed via the regular chats feature of the messaging app. This would come as a nifty feature as anyone can send anything, without having it leave traces on a conversation.

This would also help in avoiding deleting messages manually, as it would be tiresome, and sometimes forgotten by the user.

However, while the new feature is something new and nifty for WhatsApp, as was stated earlier, it is an old service that was offered in numerous applications before. That includes Instagram, which has had a disappearing photo feature on its Direct Messages platform for years now.

Users can send a picture and have three options via Instagram, the "View Once" with the Bomb logo on it, "Allow Once" which can be replayed for another time, and the "Keep in Chat."

This feature has been around for years now, even so, that it is available as early as 2017 or 2018 for the social media application. WhatsApp's "View Once" feature was available to beta users before, but that does not make it a feature that was in the app for a long time already.

For now, iOS users can now have it updated via the Apple App Store.

Is WhatsApp Worth it to Use?

WhatsApp has improved a lot since its initial controversies earlier this year, but it still wants to use and collect user data for Facebook to store and potentially have it for ad tracking. However, now it has released a variety of security features to compensate for the said potential privacy breach.

Moreover, Apple's "Ask App Not to Track" is particularly helpful in preventing WhatsApp from getting data and continue to collect data even when not in use.

Related Article: WhatsApp Blocking: How to Know if Someone Blocked You in the App