"Axie Infinity" has been experiencing steep price growth as its popularity grew exponentially. As such, some investors or even gamers are thinking of buying an "Axie Infinity." 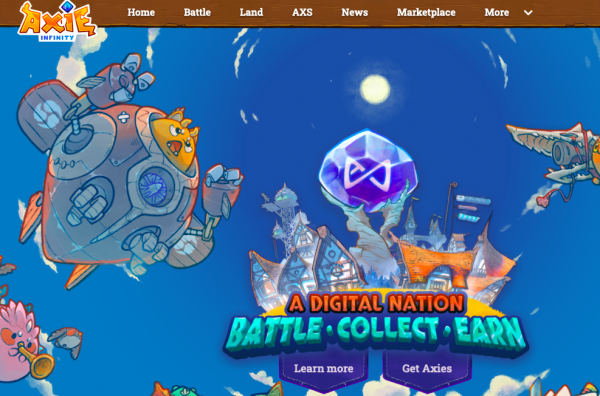 (Photo : Screenshot from Axie Infinity Website )
Buying “Axie Infinity?” Here are some of the things to consider, such as the earnings and other earn-to-play NFT games--to name a few.

That said, here are five things to consider before spending some cash on the latest craze, such as its earnings and other earn-to-play NFT games--to mention a few.

One of the things to consider concerns the revenue that "Axie Infinity" has been creating lately.

Although there is no way to earn from the profits of the game, it still helps gauge and illustrate the growth of it in general.

To be precise, Axie has already garnered a whopping $90 million revenue in just mere 30 days, as per the data retrieved from Token Terminal.

This impressive profit performance is mainly due to the in-game purchases of "Axie Infinity." For instance, the game takes 4.25% from Axie token transactions and the breeding fees.

Even so, players of the game still pocket 95% of the overall revenue. Thus, the NFT platform has been popular in developing countries due to its generous allocation, according to Fool.

How Much it Cost to Play 'Axie Infinity'

Of course, before investing in the game and buying the Axie tokens or the AXS, knowing the overall cost is necessary.

Notably, to start playing the game, users are required to buy at least three Axies, as per The Conversation. However, the token price has been increasing as the game is now one of the hottest hype.

Previously, players could start playing "Axie Infinity" for about $5 to $10. This time around, the price starts at approximately $200 to $350. That said, players will be needing $600 to join the game.

On top of that, users need an Ethereum and a crypto wallet to get hold of their first Axie.

"Axie Infinity" is not the only NFT game that lets its players earn some money by playing.

However, it is to note that the current fame of "Axie" is years in the making, which sets it apart from other counterparts. To be precise, the NFT game launched in 2017 and built its community as time goes by.

Nevertheless, other less popular NFT games cost cheaper than "Axie Infinity," here are some of the potential next craze.

Meanwhile, the price of the Axie token steeply increased by a whopping 600% in the span of mid-June to mid-July. Its value has achieved an all-time high of $29.13 before it halved on July 20 to the tune of $14.19.

It is to note that the AXS token is a cryptocurrency. As such, its value is naturally volatile, meaning prices could go up and down constantly.

Coindesk reported that an "Axie Infinity" player earns around 4,5000 SLP on average, and the value of that could go up to $1,500.

That said, some corporate employees in Vietnam and the Philippines gave up their jobs as the profit from the game is higher than the minimum wage of the developing countries.

Elsewhere, "Axie Inifinity" developers has a warning to its players.

Related Article: 'Axie Infinity' Token Increases By 66%: Mechanics and How It Differs From 'Tamagochi'-Breeding, Battle, and MORE