NASA's robot Martian explorer, the Perseverance Rover, has encountered a problem during its first collection of the Martian rocks on the red planet. The first attempt of sample gathering for the international space agency did not go successfully. 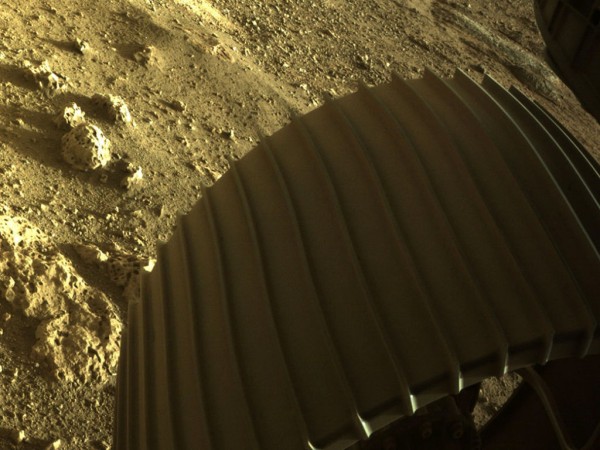 (Photo : NASA via Getty Images)
JEZERO CRATER, MARS - FEBRUARY 18: In this handout image provided by NASA, one of the six wheels aboard NASA’s Perseverance Mars rover, taken by one of Perseverance’s color Hazard Cameras (Hazcams) after its landing in the area known as Jezero crater on February 18, 2021 on the planet Mars. A key objective for Perseverance's mission on Mars is astrobiology, including the search for signs of ancient microbial life. The rover will characterize the planet's geology and past climate, paving the way for human exploration of the Red Planet, and be the first mission to collect and cache Martian rock and regolith

According to a report by Phys.org on Friday, Aug. 6, the Perseverance rover has started drilling the Martian surface in search of a potential sample of Martian rocks.

After that, the scientists would be able to process the collected rock samples on Earth. They would also conduct analysis for the gathered specimen.

NASA has posted some images of the drilled portion of ground on Mars. This was the first time that the Perseverance rover dug the Martian ground for the objective.

While the mission was underway, Thomas Zurbuchen, the associate administrator of the agency's science mission directorate posted that the Perseverance exploration had started.

The robotic vehicle was assigned to dig for the samples of Martian rock. After amassing samples, the rocks would be put in a safe tube-like container.

The scientists have put 43 titanium tubes in the unmanned robot. 35 of them would be responsible for storing samples collected from Mars' Jezero crater. They would return to Earth after that.

However, the sampling procedure was not a simple task. The scientists should know the volume of the samples inside a tube. And it did not happen as planned since the Perseverance rover failed to retrieve a Martian rock.

NASA to Run Analysis About the Problem

At the moment, the team behind the Perseverance rover does not have any idea what could be the reason for the failed collection of Martian rock.

For this process, NASA will capture some images of the Martian hole where rocks are located. They will utilize WATSON or the Wide Angle Topographic Sensor for Operations and eNgineering imager to do that.

This procedure will be a big help to the team so that they would assess the next batch of rock sampling in the red planet.

Currently, the Perseverance rover is situated in Jezero Crater, specifically in a hard-to-reach area of bedrock known as "Crater Floor Fractured Rough, as per CNN.

On the other hand, the Ingenuity helicopter has been assisting the scientists to look for some dangerous spots that would hinder the rock sampling collection.

The NASA researchers will run another attempt at Martian rock collection until they gather eight samples. They will also aim to discover more about the potential life forms that once inhabited the Red planet.

In February, the Mars Perseverance rover had shown the world the first images of the Red Planet captured by multiple cameras. At that time, NASA said that people could also hear some distinct sounds from Mars.

In the latter part of June, the space robot had celebrated its first anniversary together with the Ingenuity helicopter. All in all, the aircraft has already accomplished 10 flights on Mars, which started in April.