Google Nest Hub will be introducing a new feature that shows the latest air quality index or AQI on the user's location. It will also warn if it ever reaches unsafe levels, just in the nick of time as wildfires continue to ravage different parts of the world. 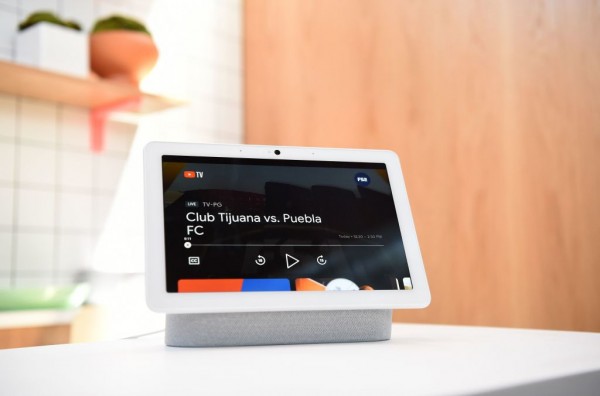 (Photo : by JOSH EDELSON/AFP via Getty Images)
This photo shows a new Google Nest Hub Max on display during the Google I/O conference at Shoreline Amphitheatre in Mountain View, California on May 7, 2019.

Smart Display, like the Google Nest Hub, is a handy device that provides the necessary information to its users, including the time, date, and even the weather predictions at a single look.

Not to mention that the smart home gadget of Google further provides a sleep sensing feature as one of its health-tracking functions.

Now, Google decided to go beyond the previous vital information displayed on the smart display.

As per 9to5Google, the Nest Hub and Hub Max in the United States will also be displaying the Air Quality Index, which could be glanced at easily as it is found on the "Photo Frame" or the Ambient screen.

The AQI info appears at the bottom-left corner of the widget that displays the time for those who use the Google Photos or the Art gallery clock face. It sits below the weather and temperature widget.

Google further made sure that the displayed air data is at least validated and could provide accurate info depending on the user's location.

As such, the search engine giant sources its data from the AQI of the United States Environmental Protection Agency.

Read Also: Google Nest Doorbell Users Fear for Their Safety as a Stranger's Cam Suddenly Appeared in the Device

Coincidentally, wildfires season is back and it is wreaking havoc, not just in the U.S., but in other places as well, like Siberia, Greece, Turkey, among others.

It is worth noting that wildfires are about to get worse due to climate change.

Notably, the wrath of wildfires spreads even in locations miles away from the fire incident as it deteriorates the air quality of neighboring residents--which sometimes reaches toxic levels.

That said, the AQI indicator via the Google Nest Hub will issue a warning if the air outside has already reached dangerous levels with an "Unhealthy" notice paired with a red badge.

The alert sits on the upper right corner of the display.

According to Engadget, aside from the unsafe warning, the air quality gauge will be displayed in a numeric ranking, ranging from 0 to 500.

It is to note that the higher it gets, the more polluted the air is.

However, if other users find the numbers to complicated to understand, Google simplified it by assigning color coding, which starts from green, indicating that it is safe, to maroon, meaning it has reached hazardous levels.

If ever the user is too busy to even look at the Google Nest Hub, an alternative option is to ask "what's the air quality near me," and the device will say the information displayed out loud.