World Wrestling Entertainment (WWE) has announced that it will be releasing John Cena-themed NFTs just in time for this weekend's SummerSlam pay-per-view (PPV).

One of the John Cena NFTs will be sold via an auction that will go live on Friday, August 20, at 8 p.m. ET.

WWE has announced that the sports entertainment company will be releasing John Cena-themed NFTs in time for the SummerSlam PPV, which will take place on August 21, Saturday.

According to an announcement posted on the WWE website, the John Cena NFTs will be released "along with never-before-sold memorabilia and experiences."

500 limited edition John Cena NFTs will drop on August 21 in time for the SummerSlam PPV. Along with these John Cena NFTs, there will also be a limited-edition box of merchandise that will be released. The merch box is personally curated by John Cena.

The John Cena NFTs will be available at WWE.com/NFT. 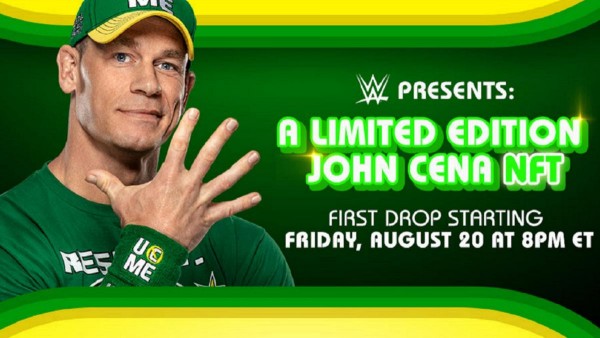 A "platinum tier auction" will take place on August 20, Friday, at 8 p.m. ET. It will end when the SummerSlam PPV begins the next day at 8 p.m.

The winning bidder of the platinum tier auction will receive a one-of-a-kind NFT, a personalized WWE Championship Title Belt with the name of the winner engraved on the side plates, and the "Dr. of Thuganomics" style chain John Cena used during WrestleMania 35.

The winning bidder will also win a once-in-a-lifetime WrestleMania experience. WWE's WrestleMania is the annual flagship event of the sports entertainment company that usually takes place every April.

The once-in-a-lifetime WrestleMania experience will also include VIP access and hotel accommodations.

WWE's John Cena NFTs are the latest sports NFTs additions that fans can look forward to getting their hands on. NFTs, or non-fungible tokens, have been growing in popularity as of late and many known personalities, brands, and organizations have joined the hype.

Athletes and sports organizations are part of those that have joined the NFT hype. The most expensive sports NFT sold as of writing is the image of NBA star LeBron James doing a tomahawk dunk. The LeBron James NFT sold for $21.6 million.

Another athlete who got into sports NFTs is NFL star Tom Brady, who even set up an NFT company called Autograph. Sports betting operator DraftKings also released limited edition Tom Brady NFTs just last week, but the launch did not go the way it was planned.

DraftKings eventually admitted that some fans had more chances than others to get their hands on the limited edition Tom Brady NFTs.

Top 10 Most Expensive NFTs in the Field of Sports

Tom Brady Debuts 'Autograph' NFT to Produce Digital Art Together with Other Athletes, Artists, and MORE

John Cena Confirms Being Medically Cleared, Talks 'WrestleMania 32' And Being A Company Guy

Top 5 WrestleMania Matches That Almost Happened, According To WWE