The space robot flew in Jezero Crater, particularly the South Seitah region, which is deemed to be a house of potential life forms.

According reports, the latest flight was the longest run for the robotic launcher, which lasted for 169 seconds within 1,476 feet. The Ingenuity robot was initially launched at 32.8 feet into the atmosphere. 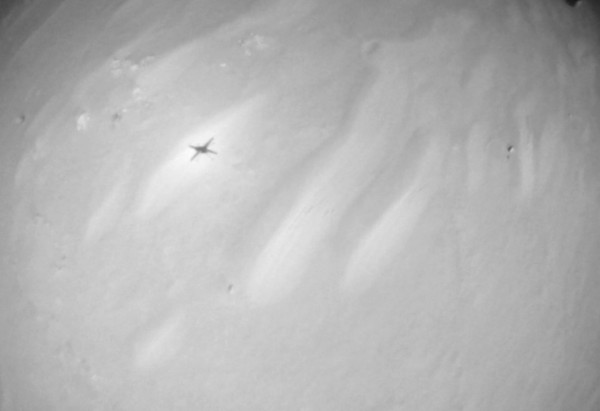 (Photo : NASA JPL from Twitter )
Ingenuity helicopter during its 12th flight on the red planet.

In a report written by Digital Trends on Wednesday, Aug. 18, the path for the helicopter was not an easy task.

However, the robotic vehicle managed to surpass several obstacles along its way. Plus, NASA was able to capture the pictures during its take-off.

A dozen for the books!🚁The #MarsHelicopter’s latest flight took us to the geological wonder that is the “South Séítah” region. It climbed 32.8 ft (10 m) for a total of 169 seconds and flew ~1,476 ft (~450 m) roundtrip to scout the area for @NASAPersevere. https://t.co/cM9xzI8rza pic.twitter.com/SDRVMpOPoo

The Jet Propulsion Laboratory even developed a 3D image of the mission to see if there could be some interesting findings in Ingenuity's 12th flight test.

This also helped the team behind the Perseverance rover to check if the current location was viable for research.

For the part of the international space agency, the 12th flight was considered to be risky since the vehicle could not clearly see its landing spot in the location. The JPL team even expressed its concern to the robot since some confusion could be made along with the Mars mission.

Before the flight, the team guaranteed that the flight's navigation system would go as planned regardless if the Ingenuity helicopter would touch down on a regular or irregular surface.

It turned out that their assumptions would change since there was an oscillating pattern in the movement of the helicopter.

By that time, the team feared that the 12th test could go unsuccessful. If that happened, the crew would most likely move forward for the current flight and refocus onto the next test.

After the success of the Ingenuity helicopter in its 12th flight. it became the "first aircraft" to have a manageable control while on the other planet.

This year, the robotic vehicle has undergone many challenges. It even failed in its previous flight, but had recovered to finish its interrupted fourth flight on the red planet.

Since the incident, the helicopter further experienced several mishaps along its way, but it always managed to get back on track.

The team has implemented the solutions from the past encounters of the space vehicle to solve the issues it faced.

Initially, the team was not really planning to incorporate the Ingenuity helicopter in the Mars mission. The unmanned aircraft was planned to be used as an assistant of the team for their space trips.

However, what the team had discovered was its capability to maneuver during test flights.

As a result, NASA decided to officially use the robot for its successive test flights on Mars. It was even used to help the Perseverance rover gather information, so scientists could gather more data about the red planet.

According to Space.com, the space agency said that the total distance that the ingenuity helicopter traveled was nearly 1.4 miles.

All in all, it has already flown in Maras for about 19 minutes in its first 11 flights.